As a new runner, I’m still learning the ropes, but this past weekend, my sister and I ran our first 5K (a Glow Run) and we had a great time! Below, I’ll tell you how I got here and give you some tips and tricks for How to Conquer Your First 5K.
I was never an athletic child. I didn’t ask to participate in any sports and I wasn’t very outdoorsy. I would play outside with my friends and we would ride bikes from time to time, but I never did anything very challenging and I preferred to play inside or watch TV and eat snacks. During P.E., I was always the slowest or the one who couldn’t finish a task (like climbing a rope!) or I made excuses to get out of the activity for the day. In fact, the most athletic thing I ever did was march in the band…and I wasn’t very good at that so I quit when I was in 10th grade.
When I was in the third grade, I had severe arthritis in my knees. I know, it sounds funny, but it really happened. I woke up one morning in severe pain and I couldn’t straighten out my legs. My knees were stuck between a 45-90 degree angle every morning. I walked with my knees bent and was in constant pain. My doctor prescribed aspirin every four hours around the clock and the funny thing about that was that I didn’t know how to swallow a pill. My mom would get up every four hours and dissolve an aspirin in a spoon of water and wake me so I could take it. I took aspirin and a spoon to school with me so that I could take it then as well. My classmates took turns getting my lunch tray or taking my paper to the teacher’s desk. The adults around me didn’t want me to have to walk and be in pain any more than I had to. Eventually, my legs would straighten out, sometimes by the end of the day, only to be stuck again the next morning. But, after time, they straightened out and I could walk normal again with just a little pain. I would still use that as an excuse to not do any physical activity at school. Playing volleyball or baseball or running track today for P.E.? Nope, my knees hurt too bad…
These days (and the days when I was up to 370 lbs) I still live with some pain, but the stiffness rarely happens. I did have one cortisone shot in one knee a couple of years ago from some residual aching, but otherwise, I’m okay most days. I don’t have to take any medications for arthritis, but I know that it’s still there for when I get older.
I was telling this story to my workout partner on Thursday morning and her response was, “and look at you now on the treadmill, running every day!”. And now, I just have to tell you about my experience with my very first 5K!
Back in October 2016, I declared (on Facebook, so you know it’s official) that I wanted to run a 5K for domestic violence awareness by October 2017. I had begun walking on the treadmill, but hadn’t really run yet at that time. I started to increase my speed some, but I was pretty lax with my “training” until March 2017. During the first week of March, I buckled down and started the C25K program to really start my training. My older sister saw that I started it and decided to start it as well so we could run our first 5K together!
Well, I made it through Week One of C25K, but it was so tough that I decided to run it a few more times. Honestly, I haven’t attempted anything past Week One because I was having such a difficult time. I think I was running too fast during the run times and not slow enough during the walk times so I need to give it another try with a different pace. However, I have not stopped run/walking and I’ve hit a few PRs (personal records) along the way. My first PR was a day when I attempted the 5K program on the treadmill and ran for ten minutes straight. I completed the 5K on the treadmill in 48 minutes that day. Another PR that I hit a couple of weeks ago was when I ran for my first FULL MILE! That one was an exciting one for me.
These days, I get about 1 to 1.5 miles each morning before my strength training, but I hadn’t attempted another 5K until this past weekend when my sister and I suddenly decided to move up our first 5K from October to May and run/walk in a Glow Run with my local YMCA.

We were so nervous in the days leading up to the Glow Run and the day of the run, we were wondering what in the world we had gotten ourselves into! I had heard/seen on Facebook that the run would be at least partly on a trail and neither of us had done any trail training. In fact, I had never even run OUTSIDE at this point. But, we were determined to do this so we headed out to the event with our excitement and our neon matching clothing, picked up our glow sticks, and prepared to run/walk our first 5k.

Let me just tell you, the trail was BRUTAL. There were parts of it that was thick with sand and areas where there were rocks and roots to trip over. We ran for about the first 1/2 mile to 3/4 mile and then in little spurts here and there, but we walked most of the way. It was always a brisk walk, but walking seemed to be our only choice for two beginners who knew nothing about trail running.

We finished in just over an hour and had a little cheering crew of family and a one event person. Benjamin made us “trophies” from additional glow sticks and told us that we weren’t the fastest, but we were the BEST runners. We had a BLAST and I can’t wait to do another 5k to see how I can improve my time with a better course!

As far as the day(s) after the run, my sister said her shins are a little sore and I tweaked my knee at some point so it’s been twinging and popping. It may be due to some of my arthritis or I may have stepped funny on a rock or root during the run…I’m not sure. I took off Sunday (my usual rest day anyway), did the elliptical on Monday, and finally got back on the treadmill on Tuesday for two five minute run intervals.

Now that I have my first 5k under my belt, I’ve got the bug. I signed up for a virtual 5k yesterday to be completed in May and Howard is buying me the Disney summer running shorts 5k series for Mother’s Day (to be completed in June, July, and August). I’m in planning mode for the Purple Run in October in San Antonio, too! I need a 5k for September and then I’ll start looking for holiday runs as well. I’m not quite sure when I’ll feel comfortable moving up to 10k, but it’s creeping into my head slowly.

Here are my tips for conquering your first 5k:

Be prepared to really catch the bug after your first 5k because you will have so much fun and the adrenaline rush is amazing. You can sign up for 5ks in your area, travel for 5ks, or sign up for virtual 5ks and run them on your own time. Whatever you do, have fun and enjoy the sport of running. It’s amazing how good I felt after my first 5k and how excited I am to see what I can do in the future. 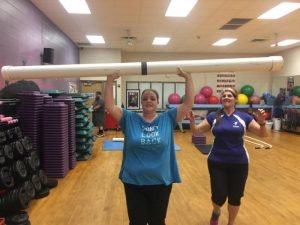 What If I’m Sore from Working Out Every Day for the Rest of my Life?