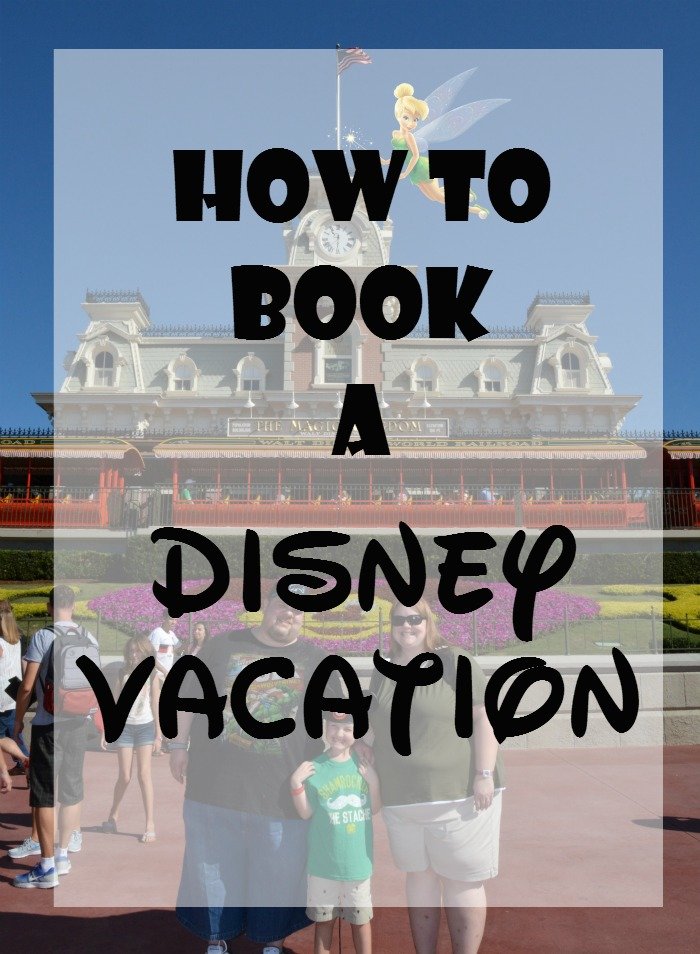 First things first, you have to be within six months of wanting to go before you can actually book it online (I recommend this site for Disney Vacation packages) or by calling (the next best thing, here’s the number (407) 939-5277). Believe me, as soon as we were headed back from our trip, we were looking to book the next trip for next March and we were told we have to wait until September. Anyway, are you within six months? Let’s get you to booking online.

Of course, you will need to know your dates and how long you want to stay at Disney before anything, but I’m assuming you know that so let’s get online and put in your dates and the number of people in your party. This was an easy step for us because we knew it would take two days to drive there and two days back and we only had one week of Spring Break so we chose to be there Monday through Friday and drive on the weekends. We were there for 4 nights and 5 days and we really needed 6-7 days and 5-6 nights so we’ll plan accordingly next year. 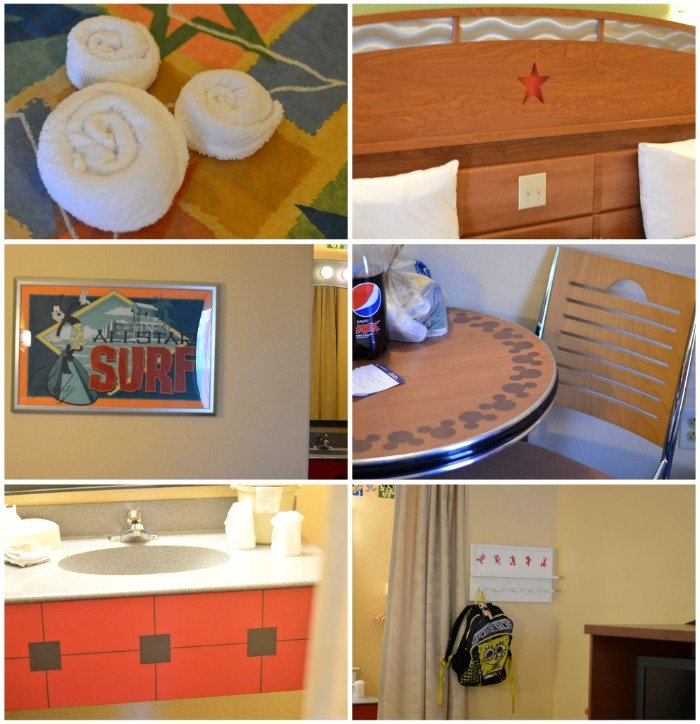 Our room at Disney All Star Sports Resort

Anyway, once you know your dates and how many people, you will need to know where you want to stay. Believe me, you want to stay at a Disney Resort on the Disney campus. Transportation is super easy and it’s definitely worth the little bit extra you pay per night. We stayed at Disney’s All Star Sports Resort, but I have heard that the All Star Music, All Star Movies, and Pop Century are all pretty similar. We also visited several other resorts for the restaurants so if you have one in mind that you’re thinking about, just ask and I’ll let you know what I know! Basically, if you have a family, are going to Disney on a slight budget, and are okay with a laid back hotel that’s not too frou-frou, you will be okay with any of the four I mentioned above.

Now that you’ve picked your hotel, let’s move onto the Disney Dining Plan. You want this, trust me. Unless you are planning to pack your own meals and bring food into the parks (which is totally okay and do-able), then you want this dining plan. My family chose the Deluxe Dining Plan because we did not want to worry about needing money for food while we were there. With the Deluxe, we were each given 3 sit-down or fast service meals and 2 snacks per day. I thought that sounded good enough, but once we were there, we really realized what a blessing this became. Let me explain.

A sit-down meal at Disney might look like this: We went to Rainforest Cafe for my birthday meal. We EACH got an appetizer, a meal, and a dessert, plus a non-alcoholic drink. Our meal easily cost over $120. All we paid was the server’s tip. Period.

A fast service meal is something you will get at the hotel’s food court or at one of the kiosk’s at the parks. For instance, our lunch was usually around 2-3pm because we were just too busy to stop at the park. We would head back to the hotel to rest and pick up a burger, fries, brownie, and a soda. We paid nothing because this was a food court and it was all covered by the plan.

Extra sodas or cinnamon rolls or chips or cupcakes, those were the snacks. We didn’t use as many snacks as we thought we would and actually ended up with 17 snack credits on the day we left. We picked up some collectible candies and cookies to bring back for the kids in the family, plus a few snacks for the road.

I’ll tell you more about the dining plan as I go through the days of our trip, but just trust me, get a plan. You don’t have to go with the Deluxe, but get one. The servers at the restaurants will scan your band and tell you what is covered so you won’t go over and owe more money. But, please do remember that you will have to pay tips if you go into restaurants with your dining plan so be prepared.

Okay, enough about the food, in the next post I’ll talk to you about the extras that you might want!

Here’s a recap of our Day One:

We arrived at Disney after driving for two days at around 5pm. We had a dinner reservation for 8pm so we had some time to check in and check out the hotel a little before riding the bus and a boat to dinner. We were greeted in our room (see above photos) to a Mickey Mouse made of hand towels and lots of Mickey memorabilia in the room.

We rested just a little bit before we headed out to test out the public transportation on the property. We rode a bus to the Magic Kingdom and then a boat to Fort Wilderness for the Hoop-Dee-Doo Revue. 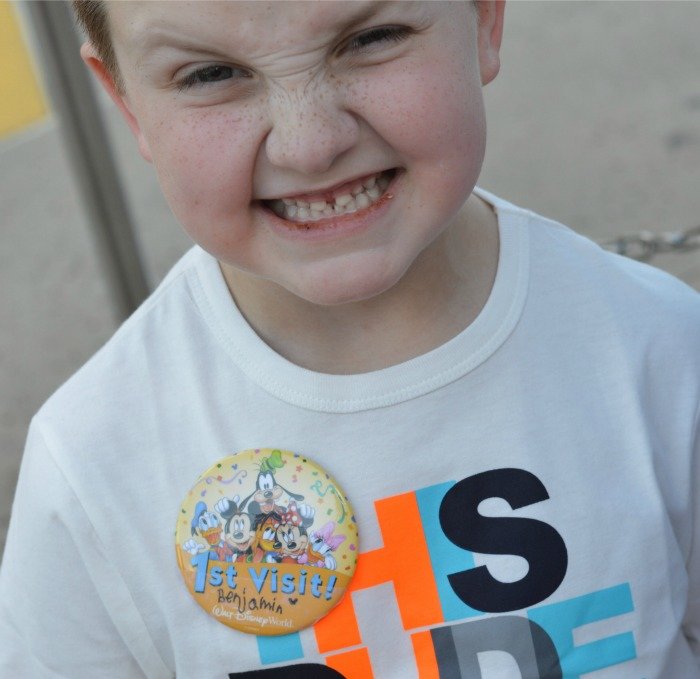 Benjamin stopped at the gift shop in our resort to get his First Visit pin! 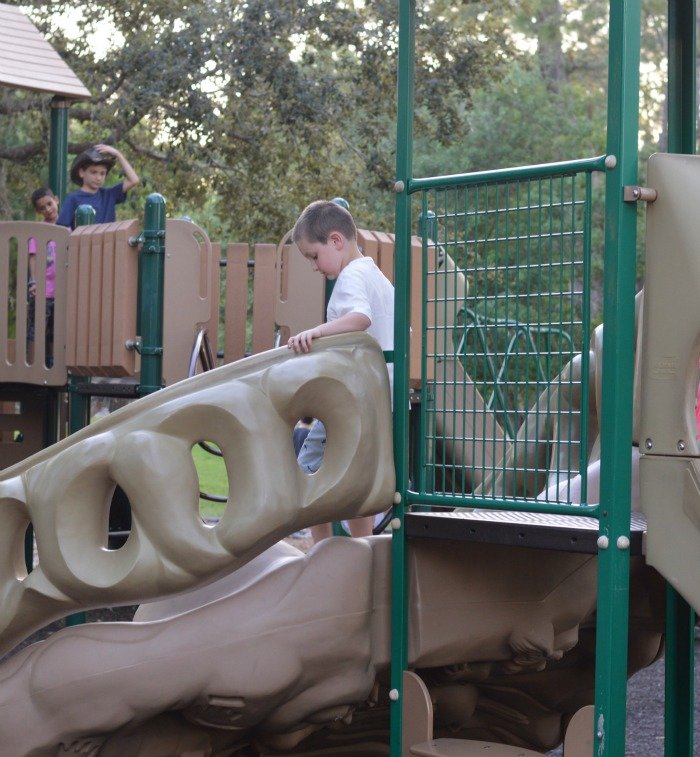 Before the Hoop-Dee-Doo Revue began, we had some time to kill and Benjamin found himself at home at the little park outside. He was in heaven already as this is one of his favorite things to do. 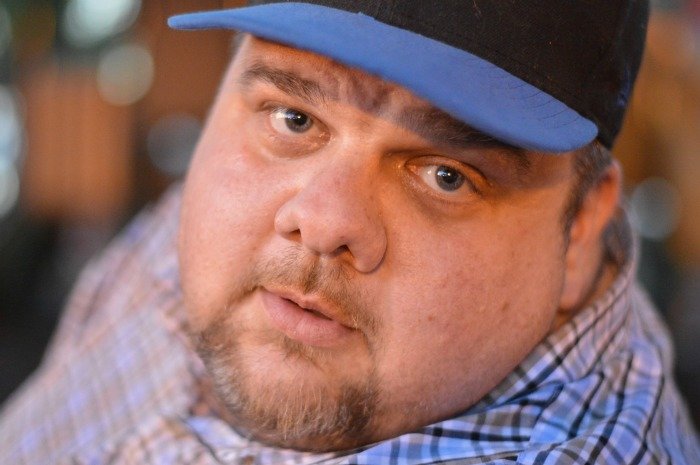 Howard just couldn’t believe that we actually made it to Disney and were out doing the things that he had been planning for weeks! 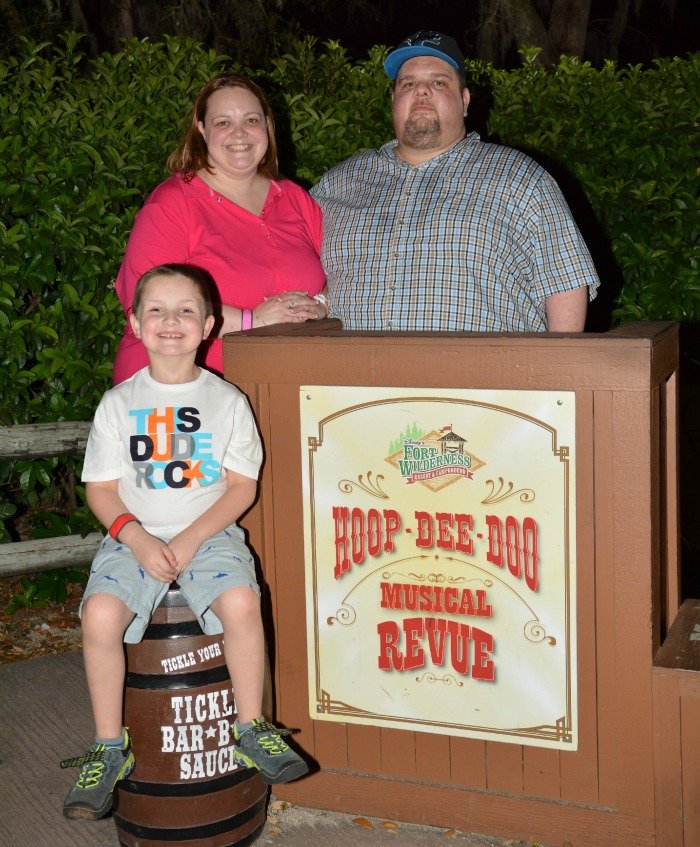 We were at Fort Wilderness for the Hoop-Dee-Doo Revue and we were able to get a Memory Maker photo of the family outside the dinner and show. Then, it was time for the show to begin! 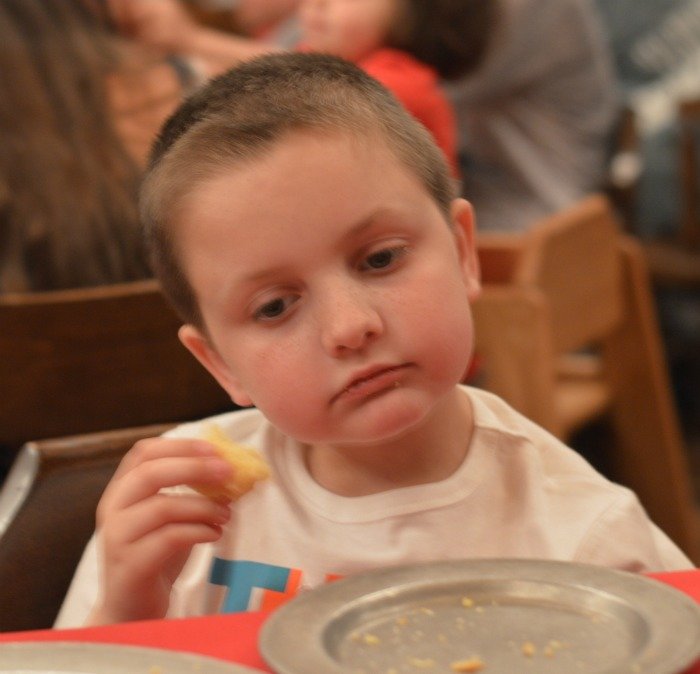 While everyone was getting sat and we were eating a little cornbread, Benjamin looked like he was going to get a little bored and/or tired. I mean, we had been driving for two days and walking a little. Nothing was happening…yet… 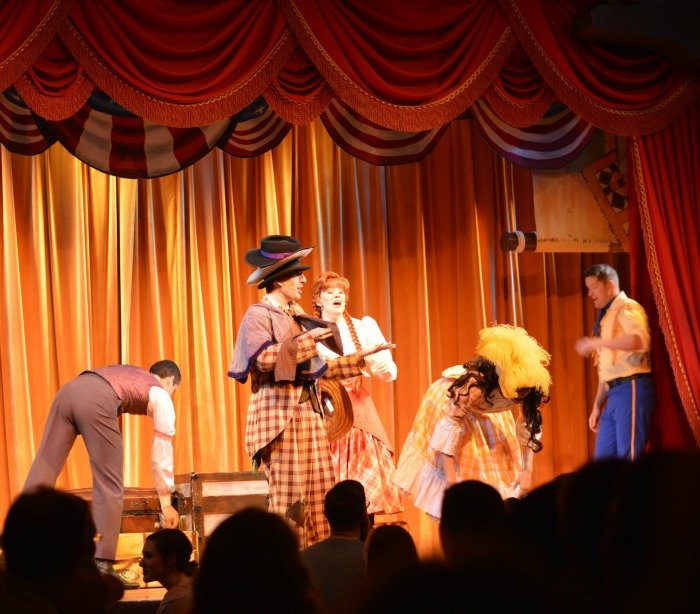 Once the show began, it was on…

I don’t want to spoil anything for you, but you have to go see this if you can swing it. It’s a live action Old West with the best characters with sing-a-longs and other fun hijinks. Plus, you get all you can eat fried chicken, ribs, cornbread, corn, beans, and mashed potatoes, with the best strawberry shortcake for dessert while you’re watching the show. We used our Deluxe Dining Plan and were “charged” two meals each, but we had the extras since we didn’t get there until late in the day on our first day. 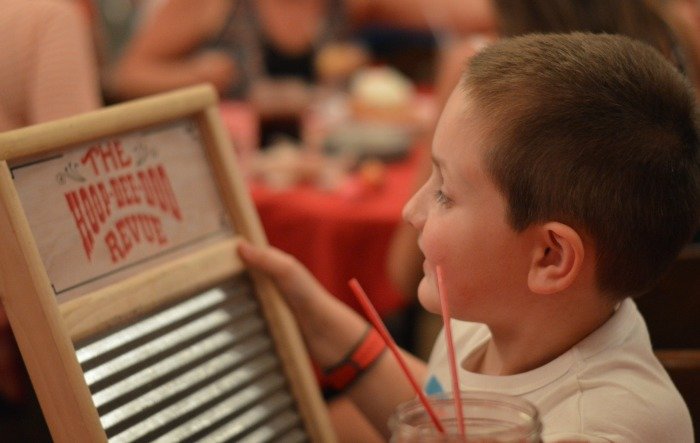 By the end of the show, Benjamin was having a blast and he declared this the best day ever (boy, did he not know what else was in store!). 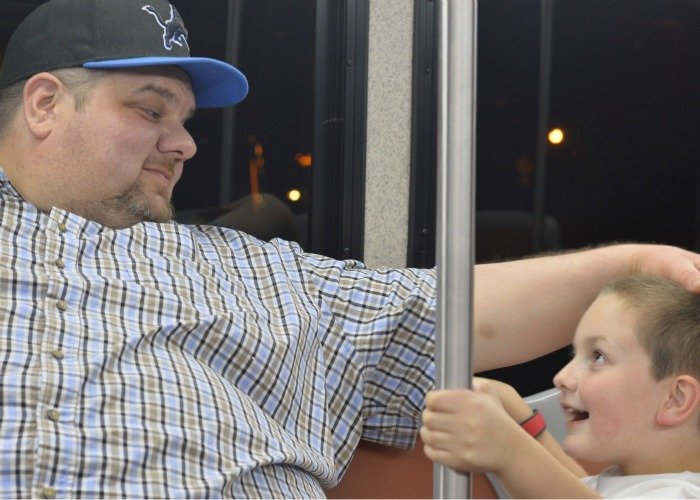 Can you tell these two had a fantastic Day One? 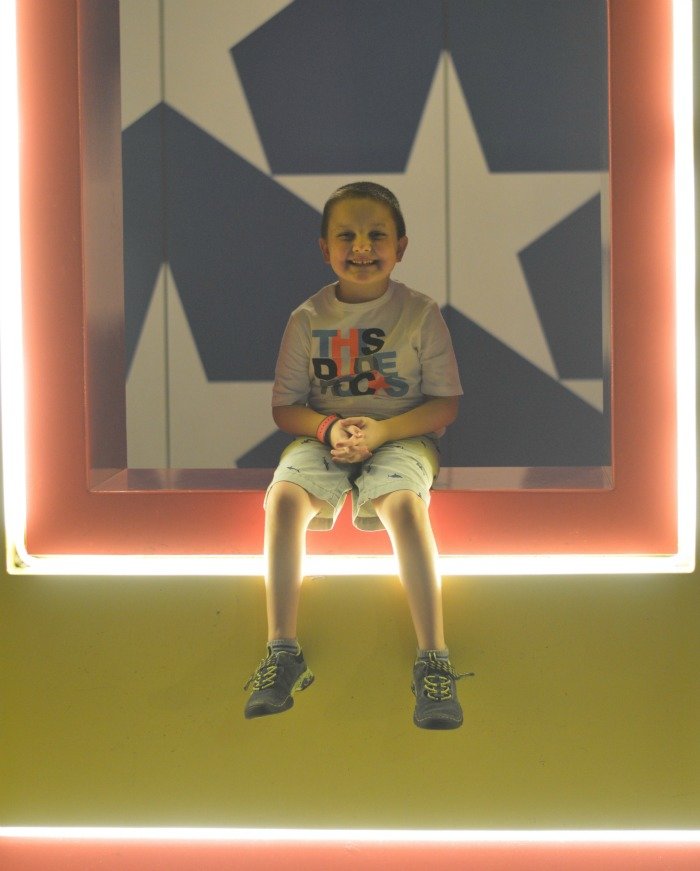 Day One was definitely a success even though we got there so late in the day. We were already exhausted, but so anxious to get started the next day. I can’t wait to tell you all about Day Two!

Are you ready to book a Disney vacation now? 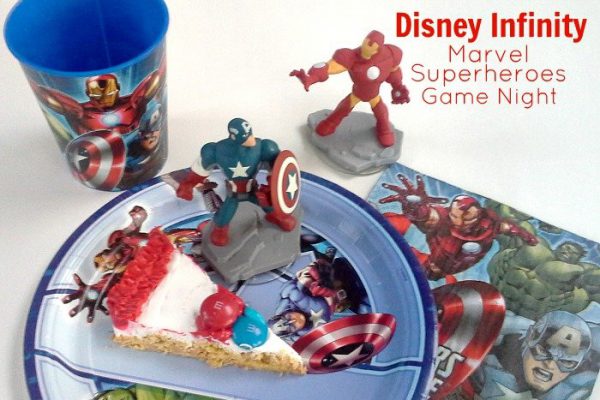