When we got pregnant and decided to get married, we had visited my parents in Palestine a few times and Howard really liked the laid-back country feel of Palestine. When he suggested that we move to Palestine to start our family, I was thrilled with the idea of being near my family with a new baby. My mom passed away when I was 3-4 months pregnant and just two months before we got married and her house was empty. My sister wasn’t quite ready to sell the house so we moved in to catch up the mortgage and live there until she decided what she wanted to do with the house. 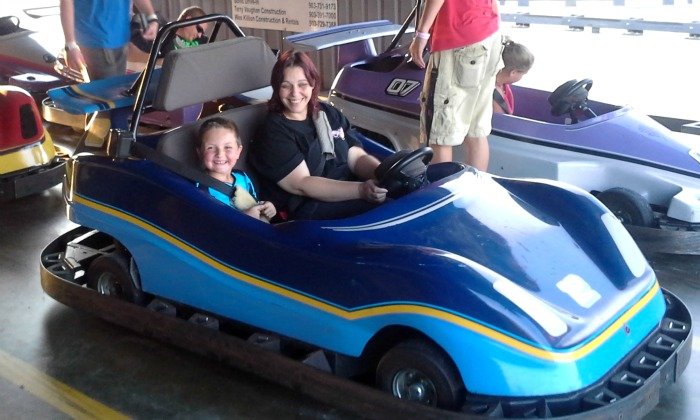 My boy got his first go-kart ride this weekend!

My boy has been “growing up country” since he was born. But, coming from a city-boy dad and a wanna-be-city-girl mom, he hasn’t had the chance to really grow up country like I had thought he would. I mean, I have dug holes in the backyard and filled them with mud for him, but he didn’t want to get dirty and I had to dump mud on him before he would actually play. He doesn’t like bugs, but would rather read books about them. He loves animals, but he doesn’t get outside and play with his dogs.

This summer; however, he finally made a friend in our neighborhood and this little boy loves to be outside. Benjamin begs daily to go play with M and this family has a farm on their land. It’s not a huge farm, but they have chickens, a goat, a horse, and they are always outside doing something in the yard.

Last Sunday, my boy did something that all boys should get the chance to do at least once in their life. He rode in the back of a pick-up truck. He was playing with his friend across the street and they needed to go to the back of their property to plant some grass. They invited him to go with them, but didn’t have enough room in the cab for mom, dad, and three kids so mom rode in the back with two of the kids and dad drove with the youngest in the front with him. I stood on my front porch watching all of this go down, them backing up onto our road while other cars were speeding past, and then watched as they (slowly) headed down the road to the back road that took them to the back of the property.

When Benjamin came home an hour later, covered in mud, his shoes soaked and dirty, he was smiling from ear to ear. I sighed with relief and plopped him in the tub. My boy is finally learning what it means to be growing up country.

That was just one of the many scary moments that I have had over the past six years with this boy. Even though I trust my neighbors (their kids are actually younger than Benjamin) and I know he’s safe, I’m just a nervous wreck when he gets to do new things. Maybe I don’t want him to grow up or maybe I just know what happens when accidents happen.

What do you think it means to be growing up country?