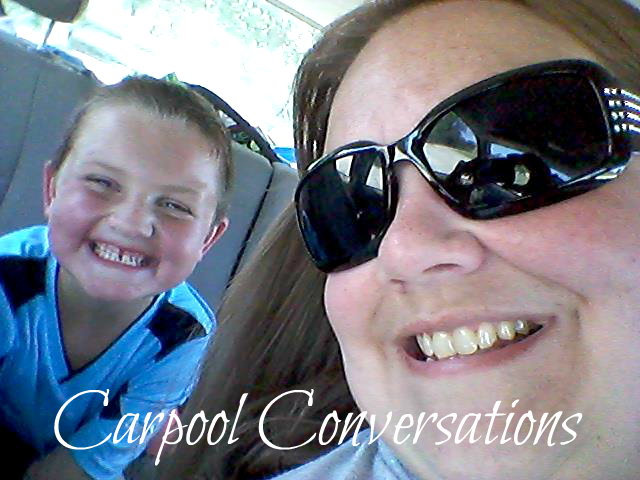 Welcome to a new series on the blog – Carpool Conversations!

About three weeks ago, the boy from across the street, Benjamin’s best friend, yelled over at us as we were getting ready to head out to school. “Benjamin, come ride in my car”, he yelled (without asking his mom first). His mom came out the door shortly after and told me that she had heard what he yelled and that Benjamin was welcome to come ride with them. She then suggested that we start a carpool week to week and so here we are. I’m hoping that these boys keep me in “business” for a while with their antics, but for now, I’m just enjoying their little conversations during the 5-10 minute drive to school.

We actually split this past week where they drove Monday thru Wednesday and I drove Thursday and Friday. This conversation happened on Friday, September 19.

Back story: We have ants in our Jeep from the tree that we park under every day. They showed up about two weeks ago and I immediately bought some ant baits to put in the back seat. Benjamin has been fascinated with them and the fact that ants crawl in, eat poison, and then die.

Benjamin: Did you know that these little things kill ants? They crawl in there and eat poison and then crawl out and back in and then they die.

M: I already knew that.

B: Yeah, because I just told you!

M: No, I already knew that as a secret in my head, but I wasn’t going to tell anybody.

B: Did you know you aren’t supposed to tell secrets to people except your mom and dad?

B: Did you know that when you’re 8, you can play football?

These boys just crack me up!

Do your kids have crazy carpool conversations?