Every month you have seen me posting about WWE and talk about my family’s newest obsession with wrestling. It started with Dolph Ziggler and then moved on to The Big Show, Ryback, John Cena, Randy Orton…and just keeps changing every week depending on my boy’s mood. I’m hoping that most of you aren’t just passing over these posts because you don’t “think” you like WWE or you don’t want to read about wrestling one.more.time. Today, I want to be real and let’s talk about children. Not just any children, but let’s think about sick children, and let’s think about what you and I would do if our child was sick and we wanted to grant them a wish. Let’s talk about the WWE and the Make-A-Wish Foundation and World Wish Day. “He took the time to give my child the memories he took to heaven with him.”

– Judy Harrison, whose son Justin was a John Cena fan and wanted only to meet his favorite WWE Superstar before he passed away.

I know my boy loves to watch wrestling for the big moves and the crazy action that goes on inside the ring. My husband gets excitement from the banter between the fighters and the techniques used to take down each other. I will even admit that I will “ohh” and “ahh” when someone gets RKO’d and maybe even when they receive an Attitude Adjustment or The People’s Elbow. But that’s all a show (sorry, hardcore fans, for the spoiler) and it’s all about entertainment. The real life stuff happens behind the scenes. Those big men fighters and their tough guy attitudes are just for us to watch. The real people behind the show are just as incredible – even more incredible – in real life. 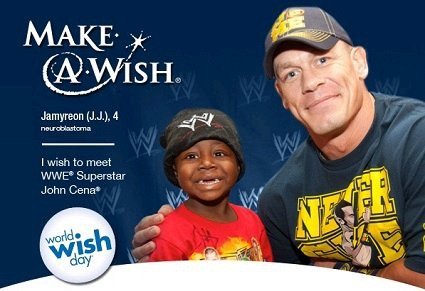 When anyone thinks of WWE and Make-A-Wish, they most likely think of John Cena. He is the “poster boy” for WWE and especially for the social good campaigns that are supported by WWE. He is a pretty face and a friendly smile on the WWE. He does that really well. He is personable and can speak to a crowd as if they are sitting in his living room. This picture is from Cena’s most recent wish-granting (and he’s granted a lot, over 300 now!) and it is adorable. 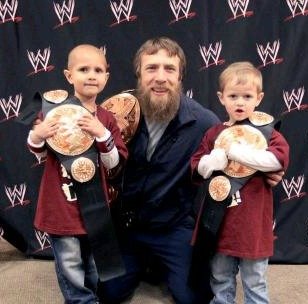 You don’t often see other wrestlers getting as involved (although I can tell you there are many who are!) but recently Daniel Bryan was requested by a young fan. The joy you see on Daniel Bryan’s face is just as “pretty boy” as Cena’s and who wouldn’t smile with these two little cuties?! 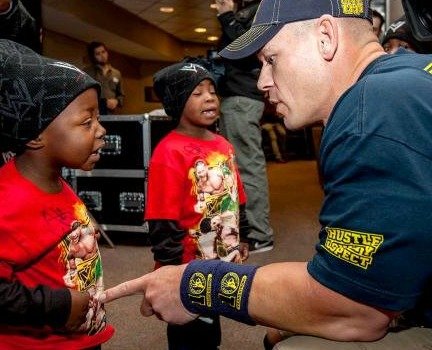 But, take a look at this picture of John Cena in a real life moment with his little wisher. They are seriously talking about the wrestlers on his shirt and you can see the engagement in Cena’s face. This is the man, John Cena, connecting with this young boy, real.life.stuff.here! 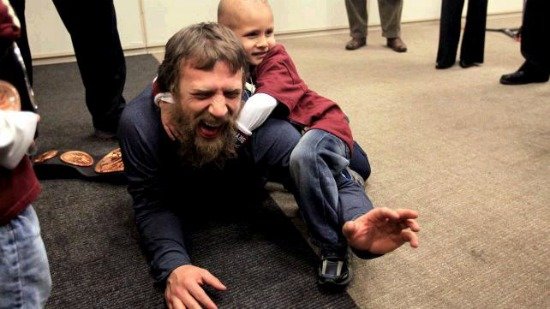 And who can fake a moment like this? Daniel Bryan is pinned by his little wisher and Bryan is in the moment, laughing and playing along. This is what grants wishes for kids. Kids don’t want photo opps and hand shakes. They won’t remember that a grown man waved or stood next to them in front of cameras as much as they will remember saying, “I pinned Daniel Bryan”. This is what Make-A-Wish does for children. This is what WWE is all about when they partner with and support a social good campaign. This is real life! 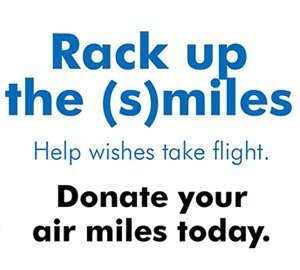 Is there anything that you wouldn’t do for your child? I know that when my husband and I found out we were pregnant (not planned…at.all…) we were instantly in love with him and started planning the rest of our lives and how we would give him whatever he needed and wanted. I can truly tell you that I would do anything to make this child smile. [it’s an adorable smile, isn’t it?!]

This is what John Cena does for Make-A-Wish and WWE. He is a real life man with a real life passion. I don’t know how much he is paid to do these things, but honestly, do you think there is an amount that would stop him after 300 wishes?! And, do you think that WWE would continue to partner for over 30 years if it was not something that was worthy of their continued support?!

We’re talking children here! You all know that I work with abused and neglected children so my passion is with children. This is about children who have been given an unfair disadvantage in life and their families who are enduring with them, every single day, and the wishes they have to just spend some time with a hero.

I know, I’m getting mushy, but I just can’t find the right words to express how much this moves me to see such a long standing commitment to children and making them happy, even if for a few minutes in a lifetime of hurt and sadness.

We hear about television shows every day that are at risk of not continuing another season because one or all of the actors are demanding more money. I’m sure you can think of a few actors or personalities that would demand a lot more for a lot less, demand extra money, just to do their job, not extend that work out into the public and for a better cause.

WWE and John Cena, as well as all of the wrestlers who get involved in their social good campaigns are doing this because they care, they believe in the cause, they are real, and they know it is a good thing. They have a special quality inside that makes children want to meet them, makes children look up to them, and they recognize that for what it’s worth. They humble themselves and enjoy putting a smile on a child’s face.

And, THAT, is why I am proud to be one of the #wwemoms… 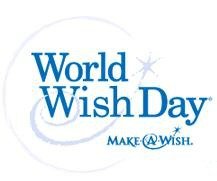 Make-A-Wish® is proud of its 30 year alliance with WWE® and the more than 100 wishes WWE helps us grant to children around the world each year. Make-A-Wish has honored WWE Superstar John Cena® as the first celebrity to grant 300 wishes! Make-A-Wish America dedicated a conference room to WWE at the national headquarters in Phoenix, Arizona, in honor of WWE and John Cena’s unwavering dedication to children with life-threatening medical conditions.

World Wish Day® is April 29 and celebrates the day Chris Greicius received his wish to be a police officer for a day, inspiring the founding of Make-A-Wish and the global wish granting movement.

During the month of April, Make-A-Wish will campaign to raise airline tickets and cash that enable wish kids to travel.

Join @WWEmoms and @MakeAWish as we learn more about making wishes come true!

Why: Join us as we talk about WWE, Make-A-Wish Foundation, and World Wish Day

Prizes: a BOSE Bluetooth Speaker, a Michael Kors Wallet, or a Toy Watch!

*You must RSVP in order to be eligible to win prizes*

What would your child’s wish be?