Back when I was pregnant, I was frantically looking for all the advice I could get and wanted to know everything that was going on with my little one inside me. I signed up for a weekly email from BabyCenter.com and would get little notes about my peanut sized fetus and the grapefruit sized baby. When Benjamin was born I learned about when he should be rolling over and sitting up and walking. I even learned a few things about how to nurture him into a smart little man and I learned what to do when he didn’t hit all of his milestones on time. Week by week I have learned so much about how to parent and what my boy would be doing next and it seems that the emails are always so timely now. This week’s email was about my independent 6 year old and how he will be asserting his own will and learning about his new boundaries and pushing those boundaries at every turn. Well, yeah, that email was especially timely because guess what, I have the most independent 6 year old on my hands and I need all the help I can get!

Sorta like a disclosure: You all know that I read a lot of blogs. I try to support my favorite bloggers as much as I possibly can. I also look for new blogs from time to time just because there is so much outstanding content out there to read and I don’t want to miss any of it! Every now and then I come across a blog post, through a link up or just through searching the internet, that inspires me to write something myself. I came across this post – Running With It from Sounds of my Pitter Patter – and I just had to get this out. Despite the troubles I’m about to tell you all about, I’m cherishing every moment with my boy and learning from him every day! 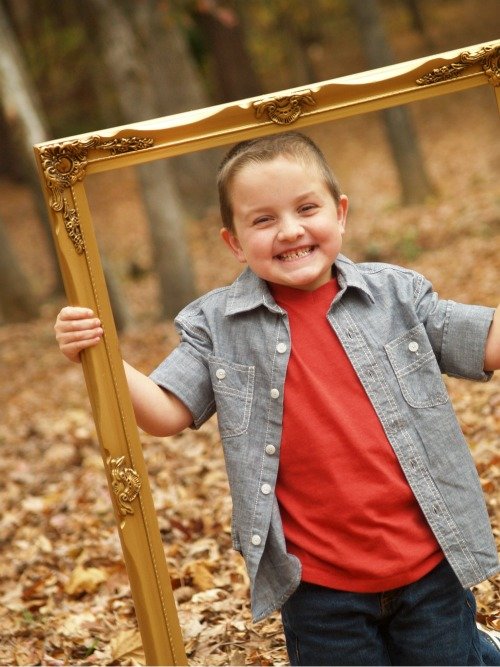 It all started on Monday when the boy woke up cranky and tired and despite what most people think about him, he doesn’t “always” have a smile on his face. He was not happy with his morning and the fights started. He didn’t want to go to school and he didn’t want to get dressed. He had lots of sleep the night before so I knew this was just a crankiness and a Monday blues type of thing, but he can usually snap out of it by the time he makes it to the car. This morning it wasn’t happening. He did NOT want to go to school. This was not an option.

We finally made it to the car, dressed and prepared for the day, but when we got to the line at school, he would not take his seatbelt off. The ladies that stand outside to open car doors usually call him “Smiley” because he’s always so happy to be at school, but today it just wasn’t happening. He did not want to take off the seatbelt and he was not going to get out of the car. We threatened with everything we could think of and it was just not happening. Howard had to get out of the car and unbuckle him and pull him out of the car. The ladies had to walk him into the building and told us to just go and they would take care of it. I knew it wasn’t over.

Later in the morning I received an email from his teacher that he had a rough morning. He didn’t want to participate in class and wouldn’t do his assignments. He laid on the floor so she had to move him to a refocus chair in another classroom. He took off his shoes and refused to put them back on. He was defiant and would not listen. Later in the morning she had to move him to yet another classroom, but eventually he came to her and said he was ready to do his work. He missed recess because he had to finish up his morning assignments.

Monday night was not a fun place in our house…at first. He had to get a spanking that I had told him he would get for not getting out of the car. He had to do chores around the house. He had to do homework. And we all had to talk. I had asked on my personal Facebook page for ideas on consequences and instead got a few suggestions for talking to him about what’s going on at school that makes him not want to go and suggestions about rewards charts and the like. So, we talked. We got nowhere. He didn’t know why he didn’t want to go to school. He was tired. He didn’t want to do his work. He didn’t know…period.

After all the talking and consequences (including no SpongeBob cartoons) we settled into a regular dinner, bath, and family time routine. We ended the night on a positive note and he went to bed on time (maybe a little early) and life was good again.

Tuesday morning was great. He was excited to wake up and watch the beloved SpongeBob. I made him a good protein breakfast (one of the many suggestions) and he dressed himself quickly. He was excited also that Tuesday was the start of Soccer practice again and he knew that if he didn’t have a good day then he would be running laps at practice instead of playing (I know the coach well and that was her idea). He came home all happy and excited to tell me that he had told his class that he was starting Soccer tonight and life was good still. He did his homework and we dressed him in his cleats and shin guards. He even had time to read three books to me!

Then he fell asleep on the way to practice. We live two miles from the Soccer fields.

I woke him up when we got to the fields and he was not happy. It’s like some little switch was turned when he fell asleep and he was tired again. He wanted to “lax” a few more minutes in the car, but that only lead to him falling asleep again. I finally got him out to the field and “shy” Benjamin came out. He has the same team and coach that he had in the Fall so there was no reason to be shy, but he hid behind me and didn’t want to participate. I gave him a choice. He could practice with his team and we would go on a dinner date (he loves to have dinner at a restaurant with just me) or he could sit on the sidelines and we would go home for sandwiches. He whined. He grumped. The coach came over and tried. Another mother tried. He was not budging.

After a little while he stood up and started mocking what the team was doing in practice, but eventually just went to another field to kick the ball around. I refused to leave practice because I was not going to take him home for more TV (what he really wanted) when he was supposed to be getting some physical exercise (what he was accidentally doing on his own) but we also did not go out to eat. I picked up some dinner that I wanted and the little toot faked excitement so that it looked like he won.

He fell asleep early last night so I guess he really was tired after all that running. Oh…I forgot to mention that after practice he also ran the track 1.5 times.

After all my worrying on Facebook about him (I worry way too much) I think I’ve finally figured it out.

Of course my sister had to chime in with “what’s the solution” and I’ll get to that eventually, but for now here’s my answer – I’m the grown up, he’s the child. I may not win every battle, but I will win the war. Period.

What experiences do you have with an independent 6 year old? I can use all the advice I can get!

Linking to the Happy Mama Movement on DudeMom.com.

Giving Up on Weight Loss