For the past 5 years and 11 months, I have been spending playtime with my boy. He is fun to play with and I enjoy our time together. But, he is almost 6 years old and he has a great imagination and it’s time for him to start playing alone (or having friends over, I guess). Seriously, this kid has an entire room in our house so full of toys that I had to pack some of them up and put them in the closet. He has an awesome Nabi tablet that we bought him for Christmas. He has a PS3 and plenty of games to play. He has a bed turned into a wrestling ring and no less than four wrestling buddies! However, he chooses to play football in the living room (or soccer)…with me. 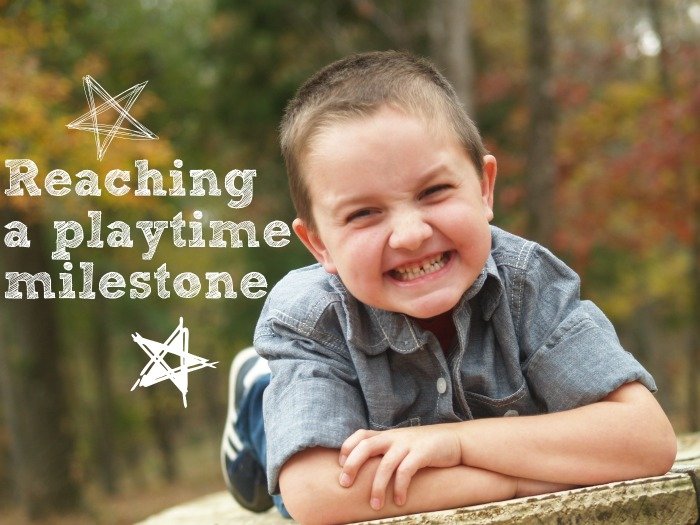 Last weekend, I think we finally hit a playtime milestone for him and I was shocked when it happened.

You see, Howard had to work 2-9 on Saturday and I knew that I would be entertaining our boy all day. We’re trying to save up some money for a big trip this Summer so we’re cutting back on our expensive out-of-the-house activities like the movie theater or the local putt-putt/racecars/video games place. It was too cold for the park so Benjamin and I headed to the library. We stayed there for two hours until they closed and then headed to McDonalds because he was hungry and it was just a little warmer so I knew he could play outside. We stayed there for an hour and then it was time to head home.

…with four hours left for me to entertain him!

I warned Benjamin that we would need to clean up around the house a little before playing (loving my clean house, by the way!) and he declared that he wanted to wash dishes. So, I set him up with the three dishes that wouldn’t fit in the dishwasher, some soap, and a sponge and I went off to start the vacuuming. I checked in on him a couple of times and he was making a huge water mess on the floor, but I just told him to be careful stepping off his stool because it would be slippery and I went back to my own cleaning. After a few minutes of dish washing and a short attempt at mopping, he told me that he was going to take a rest and play with some toys.

Okay, buddy, you just do what you want…and I kept vacuuming.

I peeked in on him and he had set up his Fisher Price castle and his new army men and was re-enacting a huge battle…so I kept vacuuming (dog hair tumbleweeds are in every nook and cranny of our house!).

I did some deep cleaning with the vacuum, in every corner, under the bed, all over the entire house. Seriously, I have a dustbuster vacuum for our wood floors so it has a smallish container and I emptied the thing at least four times.

After vacuuming the entire house, I started dinner and made some delicious Grilled Chicken Stir-fry and then proceeded to take pictures and style it for the post and send the pictures to Christy for advice and then restyle the pictures according to her advice.

Finally, after about two hours, I told the boy that dinner was ready. He wasn’t hungry and didn’t eat, but he did finally ask me to come “watch” him play after I ate.

My boy played by himself the entire two hours!

I was one happy mama.

After eating, I headed into the living room and we sang, danced, played with his new microphone and speakers, and I got the all-glowing approval and an “I love you, Mommy!”.

All is good in my world.