The Mysteries of the Magical Horse (Review, Book Tour and Giveaway) 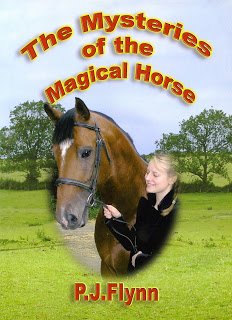 The Mysteries of the Magical Horse

Title – The Mysteries of the Magical Horse

Vicky was an ordinary teenager, helping out in her parent’s smallholding with the horses.

Her life suddenly changed dramatically into a roller-coaster journey through the ages. Through Elizabethan times; Through World War II; Through the Swinging Sixties and many more times.

Come and join Vicky and her horse Red on their exciting travels.

As you may know by now, I have family roots in London, England, and I love to hear stories from my Granny about her childhood. This story of Vicky and her horse, Red, was like reading a book that my granny would have written.

Vicky just loves caring for the horses for her family, but one day Red has something magical happen (shh..it’s a secret) and we get to go on a journey with the two of them!

If you have a love for England or like to read historical stories, you will love this. Your kids will learn as they are reading as well. Yes…I may have learned a little as I read it. It’s a book for an older child than my boy, but I enjoyed the quick read and the fun story.

P J Flynn’s books have had some great reviews, and has readers in over 20 countries worldwide.

“I want to share with everyone the absolute pleasure my family and I had reading In “The Land Of The Unicorn” and “Tales of the Wildcat”, by P J Flynn.

Tales of a wildcat is an amazing and wonderful exploration taken with Jasper – the wildcat. My grandchildren and I enthusiastically followed along with Jasper as he roamed about, met new friends and had many new experiences. If you like cats you will very much enjoy seeing the world through Jasper’s eyes and after reading it you will never look at your own cat quite the same again! This book was a fun adventure for all ages, I highly recommend it.

In The Land Of The Unicorn is a fantastical journey through historic times and awesome locations. The children loved this book as it vividly and intelligently touched on many different stories they have heard about, it opened their minds and thus opened within them a curiosity about these historic characters and a want to learn even more about them all.  We look forward to enjoying many more journeys in the future, and secretly hope for an animated feature film, as this would be a fantastic story to tell on a big screen too! I think this series would be an excellent addition to schools and libraries for story time or in any children’s bookshelf to be read over and over again. I have no doubt you and your children will adore this book as much as we did.

Thank you for the wonderful adventures Peter!! Loretta Blondo and family, Alberta Canada.

In the blink of an eye, Red had appeared in front of me. I got on his back and in a flash we found ourselves behind a small building in a large park. I looked down and saw myself wearing a beautiful dress and when I looked at Jack, he was wearing a suit making him look very handsome! I wondered what the people near this building were celebrating, so I began looking for clues as to where we were and what age we had landed ourselves in.

I peered around the wall and to my amazement saw a gigantic building in front of me with a massive crystal roof. Families were sitting around outside the building having picnics. Some were riding horses and elegant ladies were walking their dogs while children played games with hoops and tennis rackets. The look of excitement on their faces was overwhelming. Only later on I was to realise these people were the privileged few.

There was a mighty cheer from the crowd as an open carriage came into view, then everything was explained. It was Queen Victoria and Prince Albert. I recognised them as I’d seen them many times in my history books. The queen looked stunningly beautiful; she was wearing a diamond necklace and earrings with a bracelet to match, she looked a million dollars! The prince was also looking very grand in a mart uniform and three-pointed hat with a beautiful plume. This made me realise where we were; it was the 1851 Crystal Palace Exhibition. No wonder the crowds were excited! It was the biggest event Britain had seen for many years. 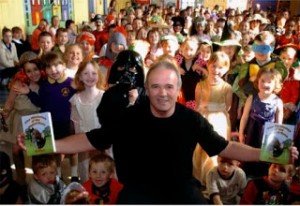 Until 10 years ago the author, from Northamptonshire, England, worked as a plasterer but two serious operations gave him the opportunity to pursue a challenge he never thought possible.

With the help of numerous friends and family members the dream of writing a book became a reality.

He was encouraged by teachers when he first began writing. Teaching history suddenly became easier because the children began asking questions about the events and people they were introduced to through his books.  As one Head teacher put it, “They seemed inspired to learn more about history. It was no longer something they had to put up with. Their thirst for knowledge almost became unquenchable!”

The author doesn’t just delve into ancient history; his characters visit the ‘swinging sixties’, The Second World War London, The Roman occupation, Victorian times, Elizabethan times and historical legends.  He introduces children to the times of their parents and grandparents as well as stories and events that moulded our country. His growing army of readers’ constantly write to him asking when another adventure book will be published and where it will take them.

His books don’t just delve into ancient history; his characters visit the ‘swinging sixties’, The Second World War London, The Roman occupation, Victorian times, Elizabethan times and historical legends.  He introduces children to the times of their parents and grandparents as well as stories and events that moulded our country. His growing army of readers’ constantly write to him asking when another adventure book will be published and where it will take them.