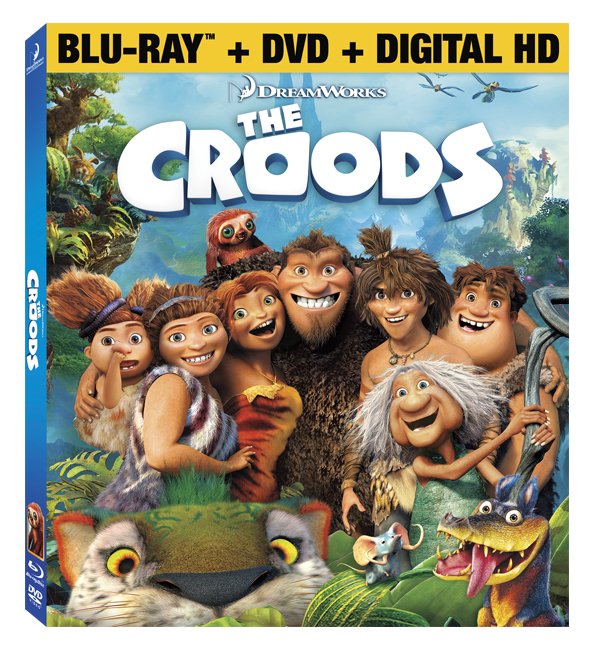 You know how much my family loves our movie nights? Well, it is really getting cold and windy outside tonight so we grabbed our new copy of The Croods and made a fun night at home together! I’m here to share with you once again some fun activities, coloring pages, and of course, our review of The Croods.

I received a free copy of The Croods on DVD in exchange for this post, but you know I love to share movies anyway.

This is a tween’s coming of age type of movie, animated and hilarious, so that young and old can all enjoy it together!

Howard and I were just as excited to see The Croods as Benjamin was and it didn’t disappoint. This movie is about a family fighting to survive when their world is falling apart…literally. Tween girls will identify with Eep as she wants to explore and learn her lessons as she goes rather than listen to what her dad’s rules. Dads will identify with Grug as he has to keep the family safe, worry about them all, while also dealing with his live-in mother-in-law. Kids of all ages will love Belt and his “Dun Dun Duhhh”. The family meets Guy who starts introducing them to the world outside their cave and the laughter comes throughout as the cave people discover (and misunderstand) the world.

I’ll say this is a must see for a Family Movie Night and it’s available NOW on Blu-Ray and DVD!

The Croods is a 3D comedy adventure that follows the world’s first modern family as they embark on a journey of a lifetime when the cave that has always been their home is destroyed. Traveling across a spectacular landscape, the Croods are rocked by generational clashes and seismic shifts as they discover an incredible new world filled with fantastic creatures – and their outlook is changed forever.

Written and directed by Chris Sanders (Lilo & Stitch) and Kirk DeMicco (Space Chimps), THE CROODS is “an Animated Avatar,” hails Bill Bregoli of CBS News and is the must-see animated film of the year! Fans of all ages will be cracking up for the adventure everyone loves. Led by an outstanding voice cast featuring Oscar®-winner* Nicholas Cage, Golden Globe®-nominee** Emma Stone, Ryan Reynolds and Oscar®-nominee*** Catherine Keener, the Croods invite your whole family to travel back in time and discover their world.

The purchase of the Blu-ray™ or DVD unlocks additional content on THE CROODS Coloring App, which allows children to color their favorite characters and scenes from the film, add text and voice to the story, and then share their storybook on their TVs at home. Also on the Blu-ray™, families can join Guy, Eep and Belt as they introduce the crazy “Croodaceous Creatures” – the striking and unique animals from the film – and much more. And for a limited time only, any purchase of the Blu-ray™ or DVD comes with a lovable Belt toy! Dun Dun Dahhh! Pre-order today!

The Croodaceous Creatures of Croods! – Find out more about your favorite Croods creatures!
Be An Artist! – Now you can draw Belt, Macawnivore and Mousephant
The Croods Coloring & Storybook Builder App

DreamWorks Animation’s The Croods DVD
The single disc DVD includes a Belt plush toy for a limited time plus the following: