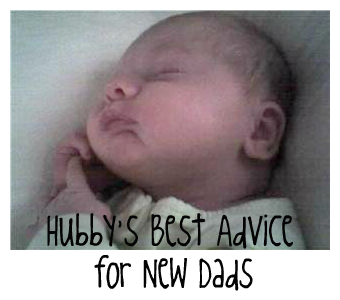 When Hubby and I had our boy, we were both pretty much in the dark about how to parent. I had been around babies with my niece and nephew, and had helped raise my little sister, but I didn’t have to do any of the “round the clock” type of work. Hubby has two younger siblings, but he didn’t really have to help with raising them.

As I have come to understand, that first week home with baby, Mom and Dad are on a high and things are great (well, if you have an easy baby, at least) and everyone is getting along. I was a little sore and slightly tired, but as soon as our boy needed to eat, I was ready with the breast and life was good. Hubby was at my beck and call and helped when I needed him for the most part and life was really good.

After the first few days or around the week mark, things got a little rougher. Exhaustion was setting in and I was trying to sleep when the boy did. The house was beginning to get messier and luckily neither of us are neurotic about super clean housekeeping so we handled it when we could. I was showering every day (which I hear is rare) and life was still okay.

One night; however, I was up a lot with the boy. I was breastfeeding every couple of hours. The boy must have been having a growth spurt. I didn’t disturb Hubby because there wasn’t much he could do at that point and I figured I would eventually get to lay down for a good rest.

By the time the sun rose, I was beat. I was exhausted and the boy was finally resting. I looked over at Hubby as he was starting to wake up and roll over and then it happened…

Nuh-uh, no way, stop it, hold the phone, get your butt out of my bed!

No, I didn’t go off on him, but I just smirked and rolled over to get some sleep.

It was a few years later when he and I were talking about those days when sleep was a precious thing, when the boy (although he slept through the night) was still so exhausting (boy did we have THAT wrong), when I reminded him of what he said.

And then…I went off on him!

There’s just nothing quite like getting mad at someone for something they did years ago because you never went off on them at the time it happened.

So, when Hubby meets men who are about to be New Dads, he always has one piece of advice.

What is the one piece of advice your husband would give to a new dad?