My boy has become attracted to video games lately and while it is adorable, he is not quite ready to play some of them. He particularly likes to play Disney games online, but the games we play are more involved than what he is used to so I end up playing them while he watches. I have never been great at video games because I get to anxious when things don’t go the way they are supposed to and I can never remember the combination of keys it takes to do the right moves.

One night a couple of weeks ago, my boy was begging to play games on my laptop and I was trying to work on the blog. I finally gave in and logged him on to the Disney website so we can browse the games. I try to find easier ones for him (or just in case I end up playing) but he gets bored easily and he likes to see the harder ones because they are more exciting. Hubby was watching a movie and playing Angry Birds on his phone and I was getting just plain frustrated with the games. I may have spouted off a “dig” to him and he might have noticed and then we may have had it out via text message the next morning (don’t you love that communication?).

So, now when I am frustrated or when Hubby senses that I am having trouble with a game, he joins us and helps. He is a lot better with games than I am! 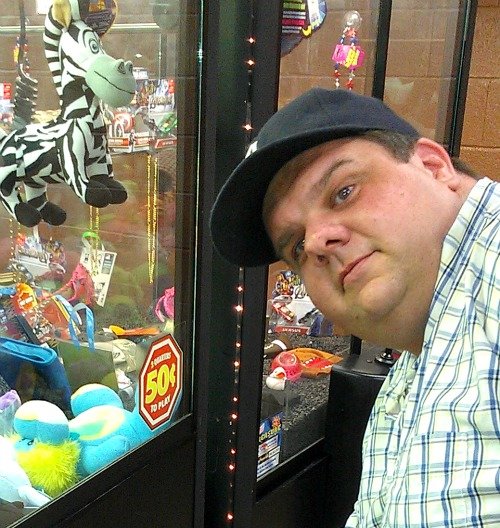 Why I Love My Husband: Part Nine

41. He understands when I’m frustrated. He may need prodding from time to time, but normally he can sense when I’m upset about something. Now, getting me to tell him what and why is a different story.

43. He likes to play games. Hubby likes to play those crane games (see above) and he wins something almost everytime he plays! He is ready for our boy to be old enough to play video games with him instead of for him.

44. He lets me huff and puff. If I’m mad about something, even if it is ridiculous, he lets me get it all out. For the most part, I let him vent about work and stuff, but there are times when I might not be as patient as he is about this.

45. He doesn’t play games. We are a silly family and I believe that our boy’s happiness is due to this. While Hubby and I may not be perfect at communication, we don’t play around with each other’s emotions. You get what you see with the two of us and that’s the way we like it.

Are games a part of your family (real games or the drama-filled games)?

Photo Printing Ideas at the corner of Happy and Healthy