I never really thought I would use this phrase, but I’m a busy mom. I work a full time job outside the home, work part time full time on the blog, and have a very active almost 5 year old who is involved in sports. My family only has one vehicle and because it is standard, my husband can’t drive it so I’m also a part time taxi driver. Does this sound familiar to anyone? On the weekends, Hubby is often working so I’m left looking for a quick and easy lunch solution that is both kid-friendly and yummy for me. I was inspired this past weekend (one of the busiest yet) and created a BBQ Crispy Chicken Salad Sandwich. I think it was a hit!

Learning to be a Busy Mom

Growing up, I was not an overly active child. I didn’t get involved in many events and my parents didn’t introduce me to much. I don’t think they intentionally kept me from sports and activities, but I just didn’t get involved. When my husband was a child, he was involved in everything. He was in two separate preschools, Hebrew school, every sport (except Soccer, goodness gracious, he does not care for Soccer), and extra tutoring and lessons. When we became parents, we wanted to find a balance between the two. We are blessed with this awesome child who loves sports and is mostly social and we want to give him lots of opportunities to grow. Right now, we are participating in Little Dribblers basketball and it’s time to start thinking about Spring baseball. We are also considering karate to help with his confidence and I really want him involved in gymnastics or tumbling to help with his balance.

This past weekend was busier than normal and Hubby and I had to get a little creative. On Friday night, we stayed home and relaxed with just a family fun night together. We knew that things were about to get hectic and we were all going to be exhausted. The Boy and I made a special trip to see Papa at work because we had a special gift for him (I’ll tell you all about it tomorrow ;)). Then, we headed to pick up Daddy. We had bought Hotel Transylvania on DVD on Thursday so we just went home for a movie and an early night.

Saturday morning, the schedule began with taking Daddy to work at 6am and coming back home to cuddle for a little while. I have a love/hate relationship with Hubby working at 6am. I do not like getting up that early because my boy never goes back to sleep, but he does love to cuddle and watch cartoons and I can occasionally doze off until the commercials come on and it’s time for me to change the channel.

The Boy had a 10am game, but this Saturday was picture day so we had to be there at 9:30. We made it on time and we even had time between pictures and the game that he was able to play some ping pong and air hockey with a new friend on his team. The game was awesome and for the first time, my boy was actually more engaged in the game and trying to get the ball (he’s a little afraid of getting in the mix of all the running wild kids). His team, the Rockets, won the game and he actually played 3 of the quarters! He didn’t get tired (thanks to our early night) and didn’t randomly try to come over and hug me during the middle of the game (yes, that has happened…I should post that video ;)). Of course, this was the ONE game that I haven’t recorded…ugh…

Anyway, after the game we headed back over to Papa’s shop because my boy decided he didn’t want to travel with me for my special date (I’m getting to that!) and Papa told him that he could help work and then help with errands for the “little” party on Saturday and the Big Game party on Sunday. After our travel to Dallas to pick up supplies for my Ultimate Buffalo BLT, my boy told me that it was too far and he didn’t want to go. I tried to entice him with talk of an NFL Superstar autograph signing, but he wasn’t having it. Bonus for Mommy – a day to myself, a date with a football player, and shopping!

Do you guys remember last week when I told you about some football legends coming to Dallas, Houston, and Austin? Well, I just happened to have a date with Tony Casillas at Sam’s Club on Saturday afternoon and he was happy to see me. Actually, I was supposed to meet another player when we went to Dallas last time, but things changed and I didn’t get to see anyone. After that happened, several of the Dallas Cowboys former players signed a football (that gift I mentioned above) and Tony Casillas was one of them. When I met up with him, I mentioned the football and he remembered signing it.

He and I talked about my blog for a minute and he is such a nice guy (the nicest, as he would tell you). One of the employees offered to take my picture with him so we cheesed it up together. She noticed that I have this huge crack down the middle of my phone and mentioned it to me. When Tony Casillas heard about it, he wanted to see and then he said that he has a plasma television at home with a very similar crack. His son cracked it while playing the Wii. I cannot even imagine that…and he was laughing about it!

These football players autograph signings are being sponsored by Tyson so I also had the chance to grab a quick snack before I did my shopping and headed back home for the party. The nicest lady was making Tyson Crispy Chicken strips, with KC Masterpiece BBQ sauce, and a little cup of Coke Zero to wash it down. Now, I have tasted some good samples at Sam’s Club before, but this was so cool to have the whole snack. It definitely inspired me to think about a couple of quick and easy lunch solutions. I picked up a bag of the strips, the two pack of BBQ sauce, and substituted the Coke Zero for my favorite IV juice soda, Diet Coke. 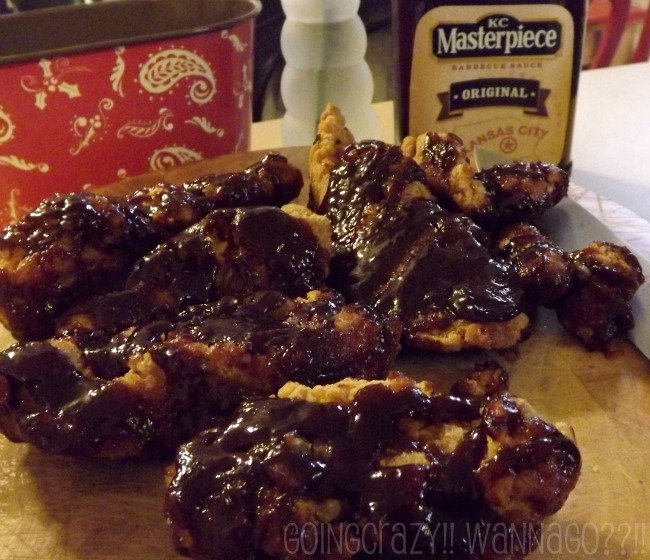 I’m not usually a BBQ sauce fan, but when I tried the sample at Sam’s Club I liked the flavor so I thought I would try a few different options. For Hubby, I made some Mock BBQ-flavored Chicken Wings. I baked the Tyson Crispy Chicken strips according to the bag instructions, but pulled them out with 5 minutes before time and poured on the BBQ sauce. After 5 minutes baking, I flipped them over, added more sauce, and baked them for 5 more minutes. These were awesome dipped in ranch dressing and even the boy liked them (well, he also likes the strips with just the ranch as well). 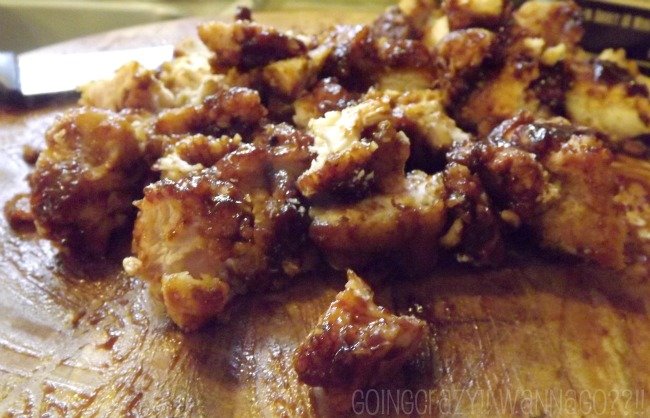 With a few of the leftover mock wings, I decided to do a little more. I’ve been feeling creative lately. I cut up the chicken into small pieces and decided to make crispy chicken salad sandwiches. I also think this would be really great on a salad with roasted corn, black beans, caramelized onions, romaine lettuce, red peppers, cheddar cheese…you get the point (I need to eat something, this post is making me hungry again!).

To make the chicken salad, I added some mayonnaise to the chicken along with celery, salt, and pepper and mixed it all together. I kept the crispy chicken strips a little chunky so we could still feel the crispy texture (they stayed crispy even with the BBQ sauce!) and then put it on some fresh Mrs. Baird’s bread. We don’t normally have Cheetos in the house, but my boy asked for them recently so I added a few to the plate to make it a fun lunch. My boy actually ate the sandwich and loved it! 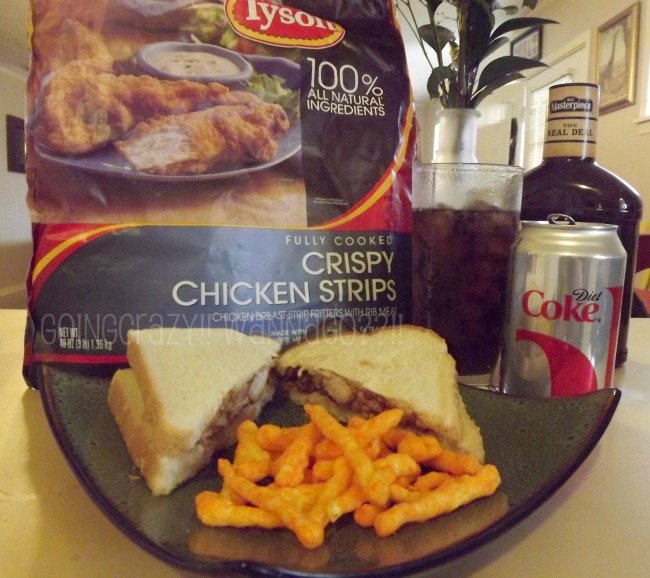 Daddy added a little fresh onion and relish to his chicken salad sandwich, but I enjoyed the sandwich without it. Of course, I had to add an ice cold Diet Coke to complete my meal. There just aren’t very many meals that I don’t add a Diet Coke to in order to keep this busy mom moving. This easy lunch was our small treat before the Big Game party on Sunday night. It was a great weekend, busy as can be, but I wouldn’t trade it for the world!

What are your easy lunch solutions on a busy weekend?

How to Personalize your Cubicle: more cubicle decorating ideas {from an Interior Designer!}
That Crazy Man I Love {and Divorce Court}