You know, there is this really Big Game coming up (on or about February 3) and my family (meaning my dad) is having this little get together.

My dad’s Big Game gatherings are infamous for being huge parties, having tons of friends over (some we know, some we don’t), watching kids running everywhere, TVs in every room (and outside) and finally…the food!

Years ago, my mom started a trend to make things easier on them as hosts of the party and she decided that the “main dish” for a big football party would be sandwiches. My dad carried on the tradition year after year and here’s how it goes:

He doesn’t stop there, but if he did, we would all understand.

On game day (and really the night before) people start descending on his house and bringing more food. Lots of sides and desserts, dips and chips, and crockpots full of yumminess pack every table, cabinet, and pretty much every surface of my dad’s house. He has someone manning a grill outside and even a designated bacon cook with two large griddles in the house!

This year, I have decided that I want to contribute to that spread and since I know whatever I bring needs to feed a ton of people (seriously, there could be 100+ people there at any one time during the weekend) then I decided to take my boy to Sam’s Club for inspiration. {I also secretly knew that Sam’s Club was sampling a Bacon BLT that sounded quite interesting!} 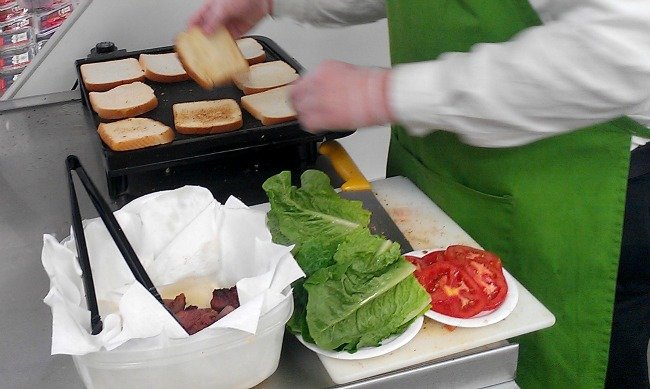 The boy and I were walking around and looking at what was being sampled when we were drawn to the meat department, like cartoon characters when the yummy smell grabs them by the nose and they float to where the yummy is located…you know…? We found this awesome demo set up with Wright Brand Buffalo-flavored bacon and Mrs. Baird’s bread and this nice young man made us a Buffalo BLT. 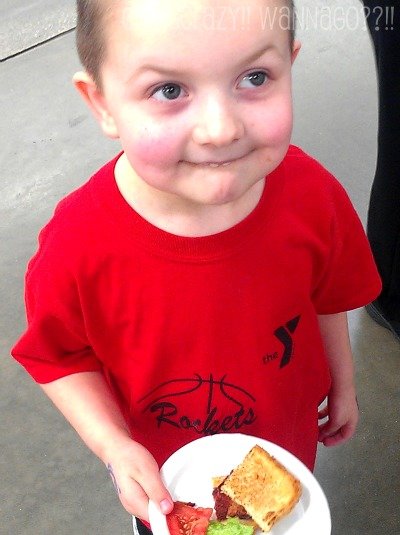 My boy was excited that he got a whole sandwich to try! The bacon was a little spicy for him (or “salty” as he would say) but I knew instantly this was perfect! My dad and husband have this ongoing debate about who likes spicy food the most. And, really, what man doesn’t love bacon? 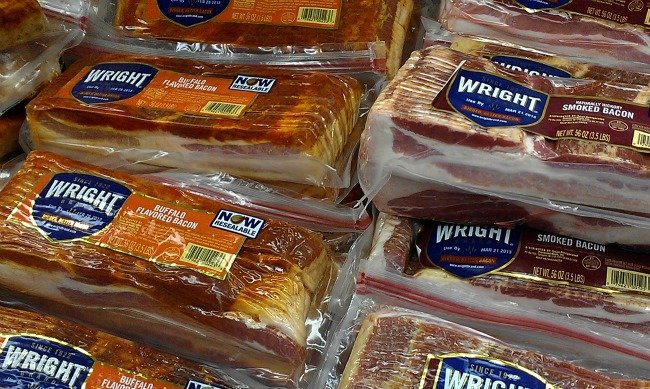 We picked up a package of the Wright Brand Buffalo-flavored bacon, some of our own Mrs. Baird’s bread, and few other goodies. I am going to make this at home for my (former chef) husband and see what he thinks about it.

Testing out the Ultimate Buffalo BLT 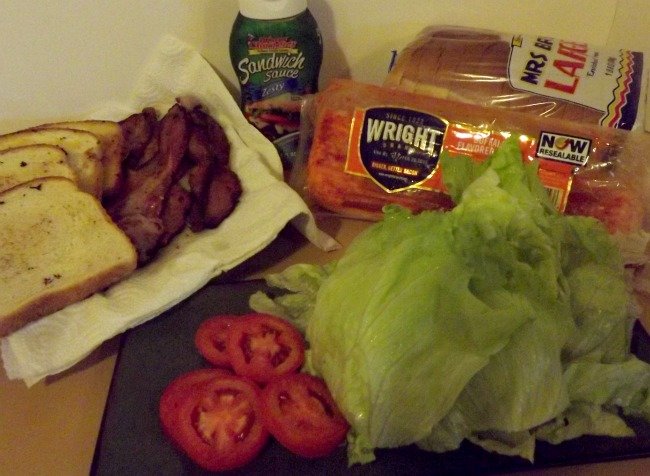 Little side story: When Hubby and I first met and I learned that he was a chef, I was both excited and intimidated. I’m not the best in the kitchen and I have a very limited collection of recipes in my head so I was living on peanut butter and cereal most days. The first time he said he was going to cook a meal and he needed spices, I think I might have said I was out of pepper, but he was welcome to the salt!

I have made a few meals for him since we’ve been together and he politely compliments me and eats it all, but he doesn’t regularly ask me to take over mealtime around the house. I don’t mind either because cooking is not my strong suit.

I decided to surprise him during one of our lunch dates (that are a lot more scarce lately) and came home before I picked him up to fix us an Ultimate Buffalo BLT. I fried up the bacon, toasted the bread, pulled out some zesty sandwich spread, and prepped the L and T. When I brought him home for lunch, and he was preparing to eat some lunch meat, I had the spread all ready! I built him an Ultimate Buffalo BLT (and myself an Ultimate Buffalo BL, minus the T) and we had a fun lunch together. Hubby was quite impressed with the sandwich and kept asking what I did different with it. He didn’t know it was buffalo-flavored bacon at first and when I told him that not only was it buffalo-flavored, but it was half-price AND I had more in the freezer, he was very happy. I think I see a few more BLTs in our near future.

I Can Be Your { Virtual Assistant, Blogger to WordPress Transfer, Basic Website Design or Small Tweaks } Friend Today! 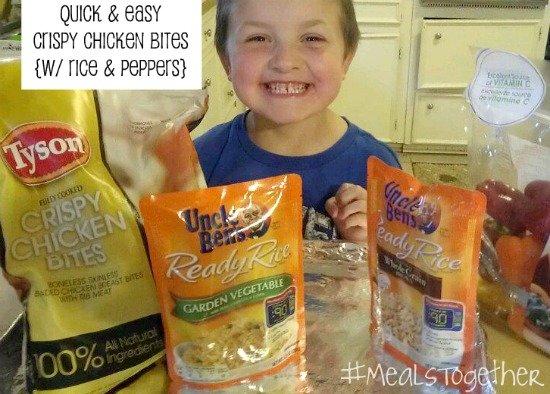