…And then I disappeared… 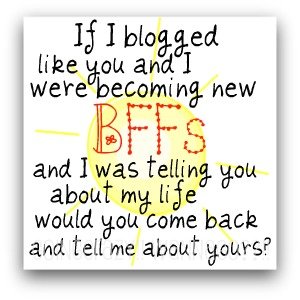 It’s Monday now and I’m looking at email and blog stats and reading other blogs and realizing that I haven’t posted since Friday. It’s funny, really, because on Friday I was all mushy and talking about you all being my BFFs…

and well, you all blew me away with your responses!! I feel so loved!!

Of course, all of my IRL BFFs will tell you that I do this from time to time because I’m completely shy and scared of commitments (or I’m lazy and I end up staying home in bed). I will “commit” to an activity or a party or a day out with the girls…it might even be my idea…and then I will back out. I really don’t know what that is all about. I mean, they are my friends after all.

I should really evaluate that and figure it out.

Anyway, I guess I’ll just tell you about my weekend quickly and then get to staring at my blog calendar again. I tend to stare at it a lot because I have so much that I want to talk about (or have committed to talk about) and then I feel paralyzed and I don’t know where to start.

I need to get my depression medications re-evaluated  and determine why I can’t focus (and my memory is bad and I’m exhausted all the time) because this is really getting frustrating!

Saturday was supposed to be this really fun family day. Hubby was off work and we had a basketball game at 10am. We had told our boy that if he had a good game that he could either pick out a specialty Hot Wheels car or we could drive to Tyler and use his $3 coupon (for his birthday) at Toys R Us.

He did have a great basketball game! He was trying really hard to get in the mix (he’s been standing back and totally scared of getting run over by the other players) and he got to throw the ball in a few times. He was thrown the ball once and dribbled it down the court, but when he went to shoot someone took it from him. We told him that is what he needs to start doing. I think eventually his anger is going to kick in and he is going to start taking the ball away from others (either that or his daddy is going to start “practicing” with him by throwing the ball [lightly] AT him).

At one point, one of his teammates (the coach’s son) had the ball and couldn’t get a clear shot. The coach has been telling them not to hold onto it for too long because they will lose the ball when the referee blows the whistle at them. So, this boy tried to hand off the ball to my boy, how exciting! But, it was too late and we lost the ball, boo!

All in all, it was a great game (and of course since Hubby was there, I didn’t record ANY of it). Hubby even got a kudos from one of the parents for putting together a healthy snack. After the game it was rainy and cold and yucky and all three of us just decided it was time to go home. We stayed home, hung out and watched TV together, napped together, and then went out to dinner around 8pm before going back to bed.

I think all three of us were exhausted!

Sunday was a much better weather day, but Hubby had to work. The boy and I went to church where I “taught” his class at 10am, we worshipped together (he is really starting to try to sing the songs rather than just dance in the aisle), and then he went to “nursery” while I attended the sermon. He and I didn’t nap like we usually do after church because we had to pick Hubby up at 3pm (and we didn’t get home until nearly 1pm, then ate lunch), but I took a short nap when Hubby came home from work.

Then, we headed to my dad’s house for Sunday dinner. The boy got a little cranky around 7-7:30 (no nap) so we let him bathe there (he loves that!) and then headed home around 8pm. We were going to watch Royal Rumble together (on DVR) but the boy fell asleep on the way home. Hubby and I watched an old DVR episode of Revenge and the championship fight on Royal Rumble…and then off to bed…

Man, we are boring!!

How was your weekend?