Celebrating the Holidays at Santa’s Wonderland 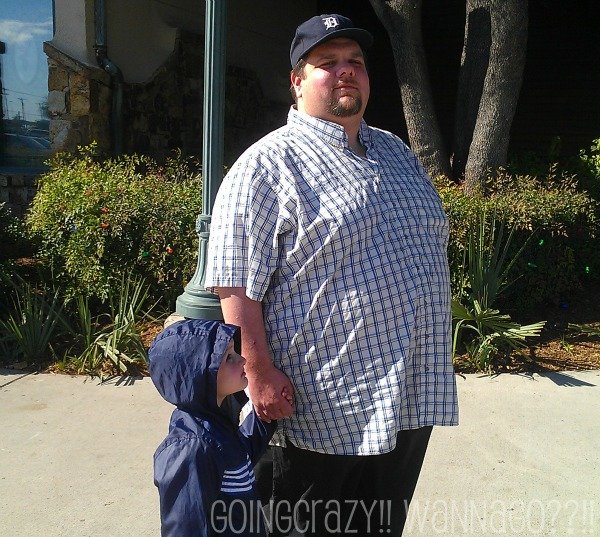 My boy is 4.5 now and this holiday season is going to be the best ever! He has been talking about Santa Claus more and more and he has exact requests. Last year, he knew what he wanted from Santa and he was very excited, but it is nothing compared to this year. He got a letter from Santa this week and was overjoyed to hear that he is on the "nice list". He has been such a big boy lately and getting praises every day at daycare that I knew I needed to treat him to a special day. When Hubby came home and said he was off on Saturday, I started making plans. We are celebrating the holidays starting now and I was ready to spend a day with my boys!! 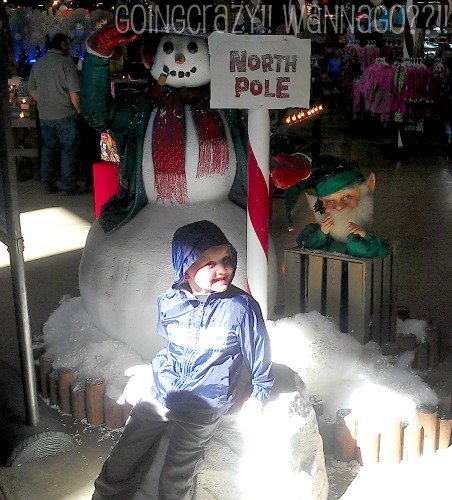 We started the day out with a preview showing of Rise of the Guardians in Dallas and then headed over to Bass Pro Shops for a special surprise. We were visiting Santa's Wonderland!! Now, once we told our boy that we were going to see Santa, that was enough to get him excited, but he had no idea how amazing this Wonderland would actually be until we got there. 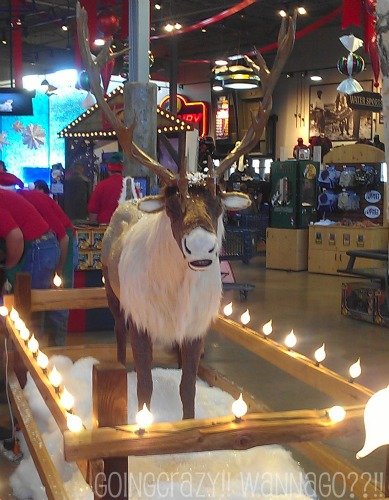 To be honest, I knew we were going to have a great time, but even I wasn't prepared for this! It was amazing!! Even though Santa's Wonderland has just started last weekend, there were already people everywhere and all of the children were jumping to get their pictures with Santa. I couldn't stop looking around at all the decorations and activities for the children to do! 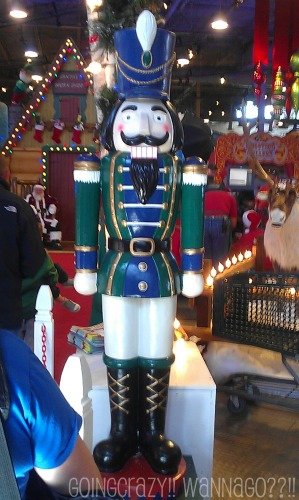 My boy was in love with these nutcrackers while we were waiting in line to see Santa. He is going to be thrilled when we go see The Nutcracker in a couple of weeks. As we stood there (which wasn't long, actually) he kept looking around and pointing and was occasionally just jumping out of excitement! I love to see him get this excited and this was about as good as it gets!! 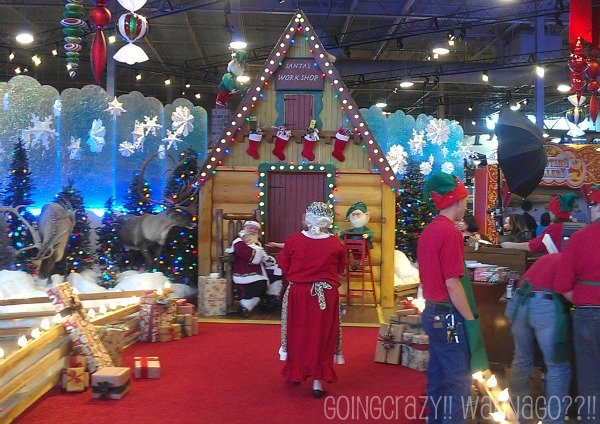 Santa, Mrs. Claus, and the elves were amazing. Mrs. Claus gave children coloring books and talked to them while standing in line, the elves were busy at work on the camera (which happened to break right before it was our turn), and Santa even came (skipping) over to us when there was a short delay and talked to my boy and the other children. There was a hustle and bustle around Santa's Wonderland, but it felt relaxing and comforting and my boy was soaking it all in. 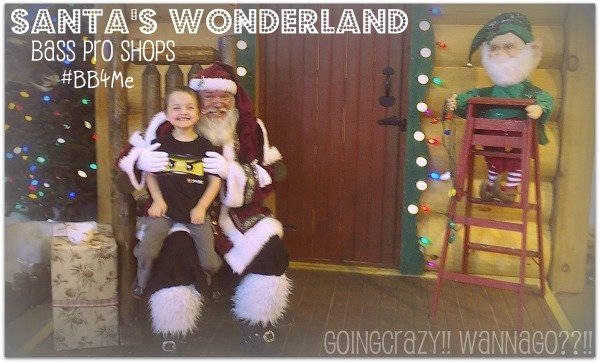 Speaking of Santa – THE. BEST. SANTA. EVER.!! He was so happy to see my boy and I got to hear that heart-warming giggle that comes when my boy is shy, excited, nervous, happy, and just is about to burst with JOY!! 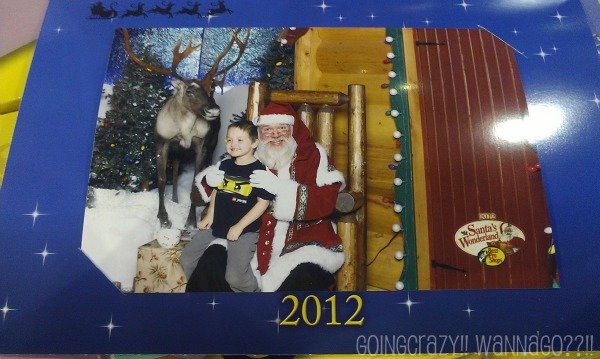 Get a FREE 4X6 studio-quality photo with Santa in a Bass Pro Shops paper frame. If you love the photo, order more online!

I'm pretty sure that my boy was still looking at me while Santa looked at the photographer, but the grins are just adorable! I also think that Santa and my boy may have been trying to out-do each other with those smiles. 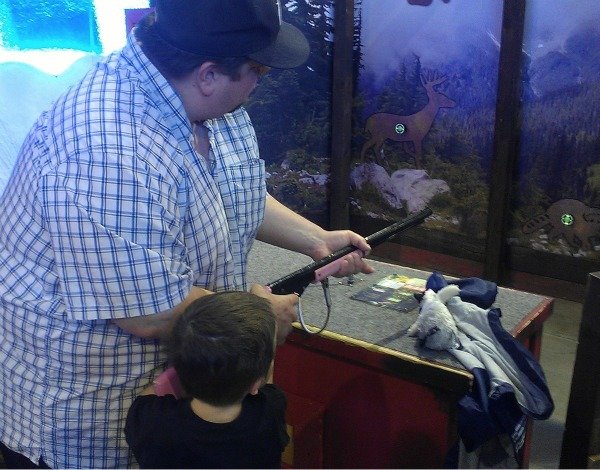 Hubby gave our boy a few lessons on aiming and shooting the animals on the Daisy Red Ryder shooting range. They were able to "test" a Daisy Red Ryder and a Daisy Pink Carbine. My boys who love to watch TV and stay indoors are getting into this hunting game. 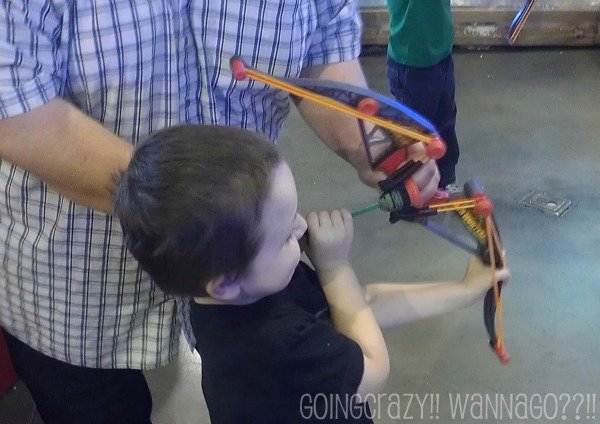 Practice bow and arrow shooting at the Shooting Gallery

The Boy loved to practice with the bow and arrow and try to knock down the ducks. He had even more fun watching Daddy do it! 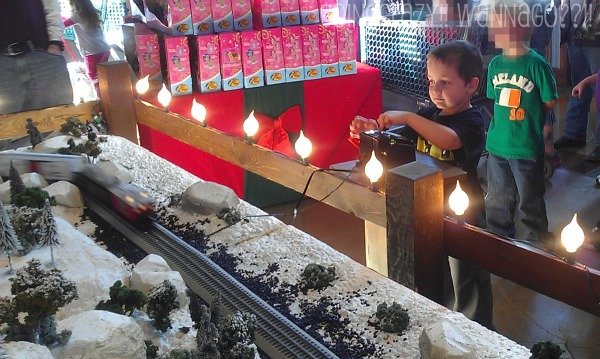 Be a Conductor of the Electric Train

Every boy (and girl) loves to play with an electric train and this one was so much fun! The Boy got to move the train forward and backward, speed up and slow down, and he was taking his job very seriously! 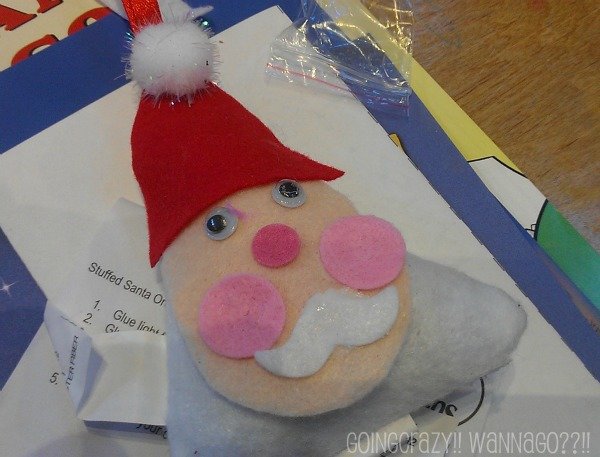 Make a new craft every week!

Santa's Wonderland has a new craft every week and this week was an adorable Santa ornament. It was simple to make with felt and glue and apparently we did a great job because Hubby thought I had bought this while he was away. 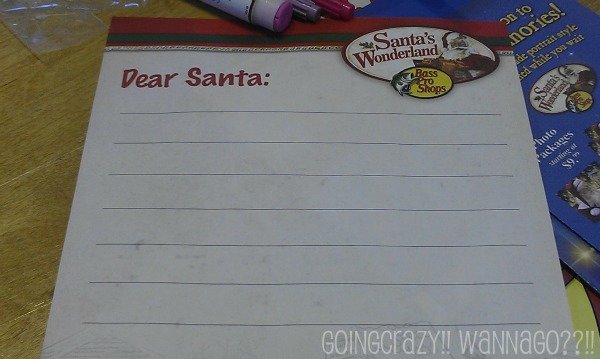 Write a letter to Santa and mail it right away!

My boy got a letter from Santa last week and was overjoyed to learn that he is on the GOOD list. He was happy to write a letter to Santa and ask if he would send us an elf. He also reminded Santa that he wants a WWE wrestling ring. They even had a special mailbox just for our letters! 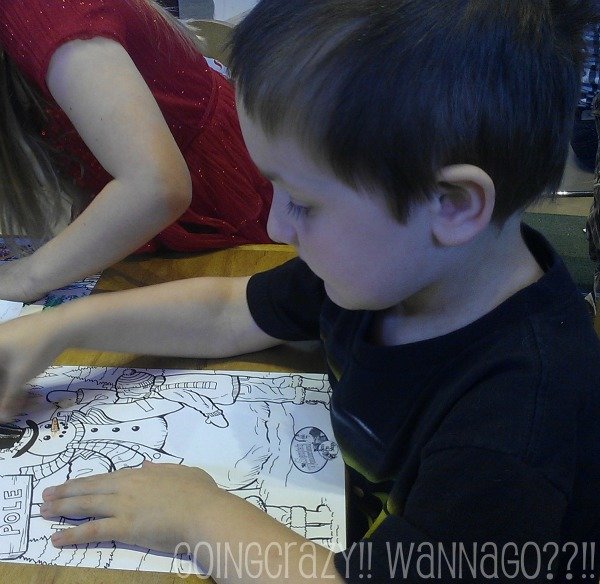 My boy and I share a love of coloring and he is getting so good at it. I enjoy watching his coloring pages come home with him each week because I can see his coloring skills improving. He was excited to sit and color a snowman at Santa's Wonderland. 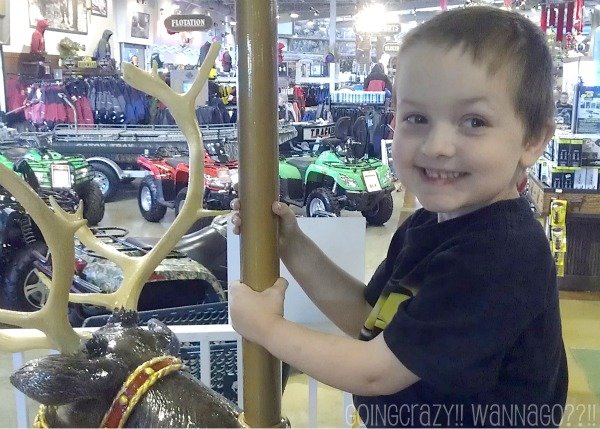 Ride a Reindeer at the Wildlife Carousel

My boy's favorite ride at a carnival or fair – the carousel. He was tickled that he could ride a reindeer and asked me to ride along with him. Who could resist a carousel and this adorable grin?! 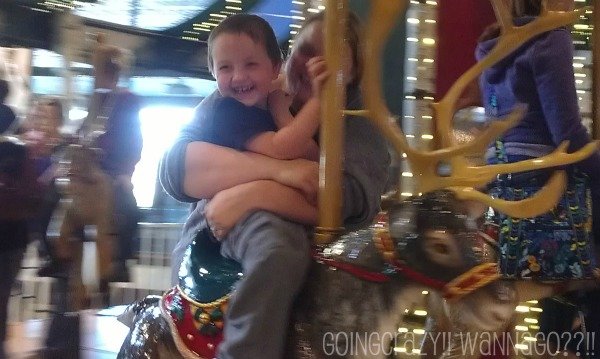 Daddy was taking pictures of us as we went round and round so we started making faces and waving at him. He caught this amazing laugh on my little man's face. I love him so much and I just can't stop hugging him, even when we are going round and round! 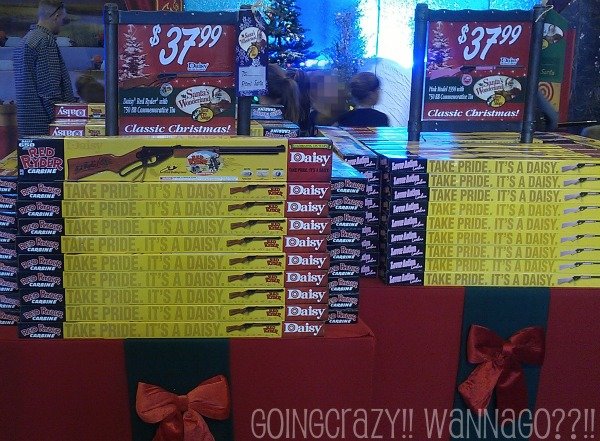 With all of the excitement of the holidays coming and Hubby is on the GOOD list as well, I had decided that we were finally going to get my man his Daisy Red Ryder BB Gun. He was pretty darn excited about it, too! 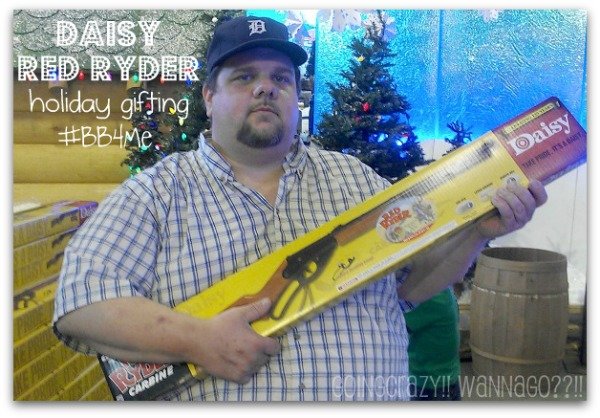 {this is his "tough guy" bb gun carrying face}

You see, my husband is a city boy, born and raised in Detroit. We met in Austin, but after the first time I brought him home to meet my parents (in small town East Texas) he was hooked. He loved the quiet feel of the small town and we moved here just after we were married. Being a city boy, he didn't get to learn about hunting and fishing and being a country kid, but he is all about learning it (except he doesn't want to camp out unless there is electricity.. ;)). He has been asking me for a Daisy Red Ryder BB gun since the very first Christmas we were together. He was working in Tyler at a country club and would go to the grocery store next door for some of their supplies. He would see the Daisy Red Ryder BB guns on the shelf and come home almost every day telling me about them (mostly because there were fewer and fewer every day) until they were gone.

I was raised in the country, but never owned a gun. My dad would go hunting occasionally, but would always borrow a friend's gun. I'm terrified of them – even BB guns – and that comes from not knowing the safety rules and never handling a gun. My dad wants to teach my son to shoot a gun and even bought him a "play" gun recently. The gun will not come to my house because we do not know about the safety rules yet. He is learning little by little at Papa's house and a few weeks ago he was visiting overnight and had the chance to play with it outside. When I went to pick him up, he told me that he had a story to tell me, "and it's a horrible story!" (hands moving around and all). He said, "I got my gun outside and there were TWO BEARS in the shed and I shot them and they died!" and he was so proud. 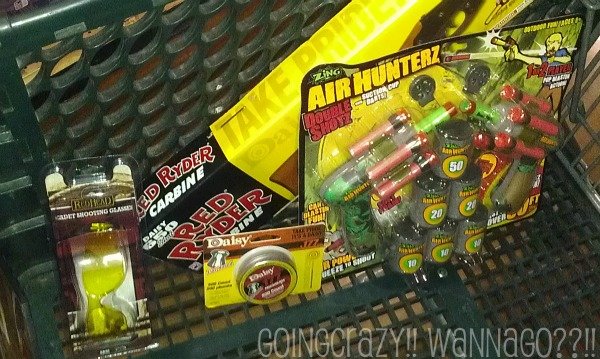 We picked up a Daisy Red Ryder BB gun, some pellets, and some safety glasses for Hubby and Air Hunterz for my boy so he would have something to play with because he can't shoot the BB gun yet.

Check out our entire shopping trip in my

Daisy recommends their guns be used by those over 10 years old.

Please note that there is only one required entry in this giveaway. All others are optional, but the more you complete, the better your chances are to win!!

Disclosure: I am a member of the Collective Bias™ Social Fabric® Community. This shop has been compensated as part of a social shopper insights study for Collective Bias™ and Daisy #BB4Me #CBias #SocialFabric. All stories and opinions are my own.

Pampering Guests During the Holidays