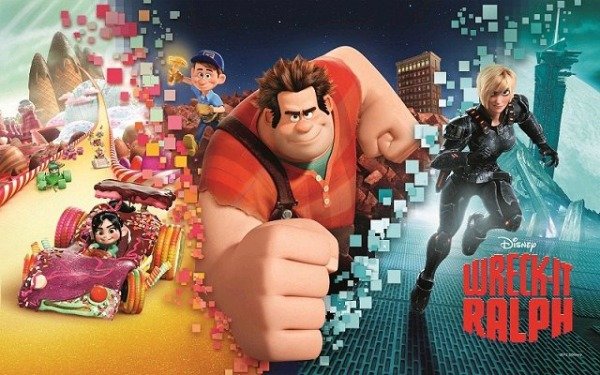 We are not a “gamer” family, but we enjoy a few video games from time to time. My husband has been dying to get us a Wii or a Playstation, but the time just hasn’t been right. I didn’t know if I would LOVE this movie because it was about video games, but it looked cute and I figured at least the boys would like it. From the minute this movie started, we were all laughing and playing along. It has the best music and the characters are so fun!!

Ralph is a bad guy in his game, but on his 30th anniversary he is, once again, overlooked and Felix is honored at the celebration. Ralph just wants to get a medal once in his life so that people would praise him…instead of throwing him off the building again. He decides he will go into another game and earn a medal (or at least get one however he can), but that takes him smack into the middle of a very different type of “sticky” situation. He’s in Hero’s Duty and Sugar Rush and then he meets a very special girl – Vanellope Von Schweetz – the goofiest Disney princess ever. I absolutely LOVE her!!

I can’t even begin to tell you all of the wonderful lessons that happen in this movie, but it’s the type of movie that you just enjoy, you want to watch again and again, you don’t feel like you’re being preached to or taught a lesson, and you just feel happy when you leave. Hubby and I have been quite disappointed in movies for our boy lately, between the language, adult humor, violence, etc. and this is a movie that we both agreed was packed full of GOOD STUFF, fun for boys, girls, moms, dads, aunts, uncles, EVERYONE will enjoy this!! It has the “old school” gaming, the NEW graphics gaming, RPG gaming, the fun of Disney – seriously SOMETHING FOR EVERYONE!! you HAVE to go see

Walt Disney Animation Studios and Emmy®-winning director Rich Moore (TV’s “The Simpsons,” “Futurama”) take moviegoers on a hilarious, arcade-game-hopping journey in “Wreck-It Ralph.” Ralph (voice of John C. Reilly, “Talladega Nights: The Ballad of Ricky Bobby,” “Step Brothers”) is tired of being overshadowed by Fix-It Felix (voice of Jack McBrayer, “30 Rock”), the “good guy” star of their game who always gets to save the day. But after decades doing the same thing andseeing all the glory go to Felix, Ralph decides he’s tired of playing the role of a bad guy. He takes matters into his own massive hands and sets off on a game-hopping journey across the arcade through every generation of video games to prove he’s got what it takes to be a hero.

On his quest, he meets the tough-as-nails Sergeant Calhoun (voice of Jane Lynch, TV’s “Glee”) from the first-person action game Hero’s Duty. But it’s the feisty misfit Vanellope von Schweetz (voice of Sarah Silverman, “The Sarah Silverman Program”) from the candy-coated cart racing game, Sugar Rush, whose world is threatened when Ralph accidentally unleashes a deadly enemy that threatens the entire arcade. Will Ralph realize his dream and save the day before it’s too late? “Wreck-It Ralph” crashes onto the big screen on November 2, 2012, in Disney Digital 3D™ in select theaters. Check out my Wreck It Ralph Activities Page for this coloring sheet and SO MUCH MORE!!

I love this clip when Ralph meet Vanellope for the first time. She is ADORBS!!

Let your kids play the games featured in the film now on the official Wreck-It Ralph website!