Skateboards for Kids: A New Experience {only the best for my sk8er boy!}

Shaun White Supply Co – Do it Better. Do it Different. #ShaunWhiteSupplyCo

Do you have a skater in your family? What about an aspiring skater who wants the best of the best in skating gear, but your budget just doesn't allow? My boy has been asking for a skateboard for over a year now and he's only 4 and a half! I'm not exactly sure where he learned about skateboards, but he will slide around the house (or the aisles of a store) and say, "look, Mommy, I'm skatin' boardin'!!". During one of our recent shopping trips (as our Walmart is still remodeling) we noticed they were setting up the bicycles, skateboards, and safety gear aisle in a different format. The Boy noticed one lonely skateboard on the shelf and I told him (as usual) that we weren't getting a skateboard this time.

This weekend I was telling Hubby about the new Shaun White Supply Co skateboards at Walmart. We decided it would be so much fun to surprise our boy tonight by picking one up and then taking him out for his first ride on a skateboard! The Boy has been running with me in the evenings and he has been an excellent coach so this is going to be his reward. The only catch was to be sure that he had a good day at daycare because we don't want our excitement to reward him on a bad day.

Guess what?!! He had a great day, we headed to Walmart, and he was super excited to get his very own REAL skateboard!! He even recognized Shaun White on the display and knew he had seen him skate on TV (that actually surprised me!). Hubby has watched and been a huge fan of Shaun White for a long time.

When Hubby was a kid, he asked his dad for a skateboard and they went out and bought a professional board and all the best in equipment. They spent over $200!! We were not prepared to do all of that, but it is so awesome that we can get a board and safety equipment that is designed by and approved by a professional such as Shaun White – but at an affordable price!! (I think I might be learning to love my Walmart again

When we came up to this "Mini-Store" from Shaun White Supply Co., our boy immediately saw the "Mingo" board and thought it was "awesome". I really like the eyeball graphic and especially the black one with the #ShaunWhiteSupplyCo emblem on it, but those were a little bit more than we were prepared to pay for (for a 4 year old!). Although the flamingo board says $39.97 on this display, it was actually $34.97 so I'm thinking that maybe different stores have different prices. However, either price is a good one for these great boards!

We must have tried on every single "boy" helmet on this aisle, but couldn't decide what was best. We are very new to this and learning as we go. We weren't sure if there was a difference in a bicycle helmet versus a skating helmet. We were also quite baffled by the size of our child's head! We knew it was big (my husband and dad also have hat sizing issues) but he seemed to be in between a 5+ and 8+ and it took us a while to find a helmet that we liked. Ultimately, we ended up back where we started and picked out a Shaun White Supply Co. helmet as well. We figured that the "shape" must be correct since it was on the skateboard display and it actually fit him better than any of the other helmets we found. We also picked up knee and elbow pads and it was time to test it all out!!

Skateboards for kids from #ShaunWhiteSupplyCo

We decided to go over to the YMCA to try out the new board because our driveway and street by the house are not very smooth. We figured that is a high likelihood that he is going to fall a few times if he really gives the board a try so we don't want him to have extra obstacles to overcome. At one time the YMCA had a skate park, but we realized this past summer that the basketball courts have replaced that. In any case, the concrete is smooth enough that my boy can really try out the board.

He was so proud to show off his brand new board with the super cool "Mingo" and "Sketton" on it. He seemed a little braver when he put on his Shaun White helmet and all of his pads. He especially loved the gloves that had padding on the palms. He was all decked out and ready to skate!!

As I mentioned earlier, Hubby was a skater when he was much younger so he tried to demonstrate for our boy how to put one foot on and push off with the other. We were both quite surprised how smooth the board moved and it was almost as if the board wanted to skate itself. I know I was used to a cheaper board that was a lot more work to get it moving. We will probably need to tighten the wheels a little for our boy to be more comfortable learning. In any case, the board is super sturdy and Hubby was able to skate a little on it before it was time to get the boy on it.

The Boy tried with just one foot and pushing off, but he didn't like the feel of not being sturdy just yet. Daddy rolled him back and forth, holding two hands, and my boy could not stop giggling. He loved it!!

Since he is not very steady on his feet all the time, I asked him if he wanted to try sitting down. At first he was hesitant, but once I got him on it and showed him what I was talking about…well…can you see that grin?!! He was loving it so much!! 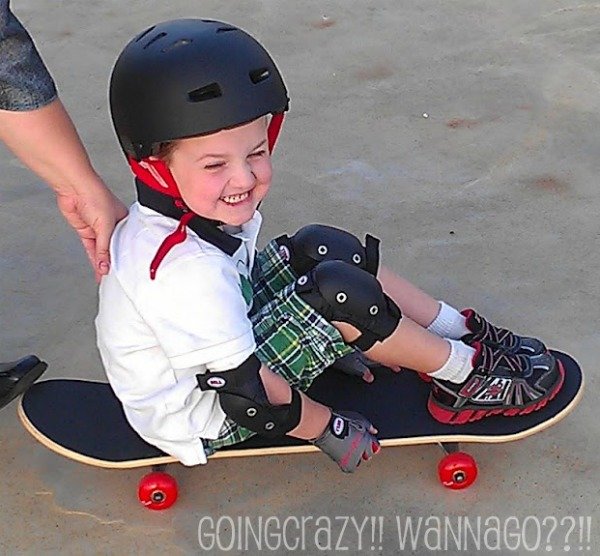 I don't know if I have a SK8ER BOY on my hands yet or not, but we had a great time playing with the new Shaun White skateboard and I can imagine this will be a new activity for us often. Hubby and I joked about him coming home from school in a couple of years and saying, "Mom/Dad, everyone at school has a Shaun White board and I need one", to which we will reply that he already has one.

Of course, I'm sure there will be even more awesome graphics by then and our board will be "so two years ago".

When did your child first learn to skateboard?!!

Disclosure: I am a member of the Collective Bias™ Social Fabric® Community. This shop has been compensated as part of a social shopper insights study for Collective Bias™ and Shaun White Supply Co. #ShaunWhiteSupplyCo #CBias #Social Fabric All stories and opinions are my own.