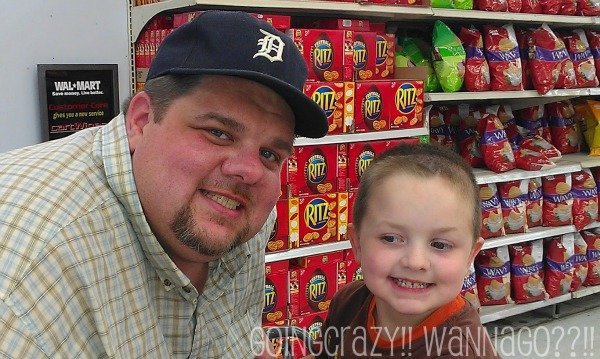 The Boy and I were out of town all last week so when we returned on Friday I was excited to get the boys involved in planning a Marvel's Avengers Family Fun Party. Hubby had received the Avengers graphic novel while we were away so he was pretty excited as well. We planned an entire day on Saturday, but Hubby got called into work so we moved it to a Family Fun Night! 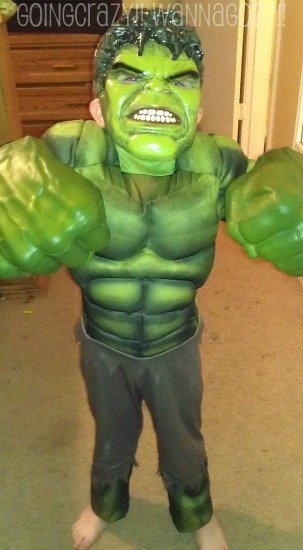 The Avengers was the first non-cartoon movie that our boy saw and we were so excited to take him to see the movie in the theater. I was concerned that I might not be interested in it, but I remember the day like it was yesterday. I was exhausted and I just knew that I would get bored and fall asleep. However, from the beginning of the movie, The Boy and I were glued to the screen. We got excited and cheered in parts and he asked me questions. I didn't know a few of the characters so we would turn and ask Daddy. We all had the best time and we left the theater yelling HULK SMASH and laughing!! We headed straight to Walmart following the movie because we had planned to buy some of the Avengers toys.

Since we watched the movie in theaters, we have become extreme Super Hero fans!! The Boy bought the Captain America mask and shield that night and has been asking for Thor's hammer every time we go to Walmart. He received a Hulk costume last month for a review and he has been wearing that off and on. We have had several days of wearing a Hulk costume and Batman mask (his original favorite hero)…and lots of Superhero Identity Crises!!

We are so excited that the movie is coming out on Blu-Ray/DVD on 9/25!!

The Avengers Augmented Reality App only at Walmart

“Walmart is bringing this summer’s most anticipated blockbuster into stores through a first-of-its-kind augmented reality experience which bridges the gap between the physical store and mobile gaming,” said Seong Ohm, senior vice president and general merchandise manager for entertainment, Walmart U.S. “We’re committed to creating engaging and fun experiences at Walmart, and we’ve tapped different areas of the store for movie fans to interact with the mobile app while shopping the more than 600 'Marvel’s The Avengers' merchandise available.” More on Marvel.com

Find out all the latest about Marvel Avengers:

I don't know how we missed this the first time around, but we are totally psyched about the Augmented Reality App at Walmart. I had never even heard of AR, but it is so amazing! We can't wait to find all the trigger points in our Walmart and take pics with our favorite Super Heroes. I'm excited to find out which Avengers is like Hubby, The Boy, and me. 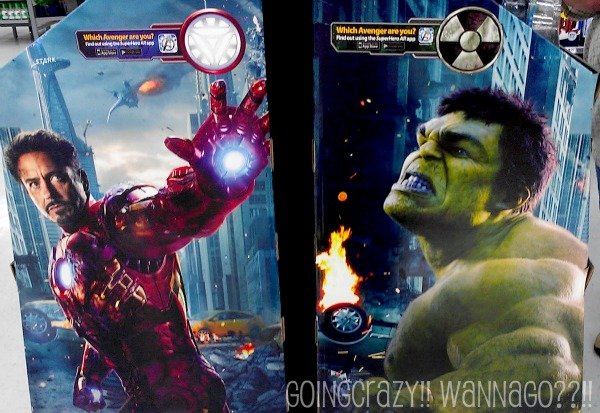 We checked out our local Walmart for the trigger points and found this toy display with information about the app. We talked to an employee in the Electronics who said that our store was running a little behind so we're checking in almost daily to find out if they have received the posters.

The AR app trigger points can be found in the following sections at your Walmart:

We found so many fun Avengers products at Walmart that we completely blew our budget and spent two hours shopping. We had so much fun playing a scavenger hunt to find all of the Avengers merchandise that we could find. Every time one of us saw a Super Hero, we would gasp and rush over to it. I snapped so many pictures of everything and came home with almost 200 pictures to go through. While we couldn't buy it all, we bought a lot. We wanted to plan the most amazing party to celebrate the movie coming out. Our boy has been doing a great job with listening and he had a great week with my sister and brother-in-law while I was working in Houston. We wanted to spoil him (and ourselves) and have a fun party. We picked out quite a few toys, clothes, and some Marketside Pizza – all with Marvel's Avengers on them. You can see more of our shopping trip in our Marvel's Avengers Family Fun Night shopping Google Album. 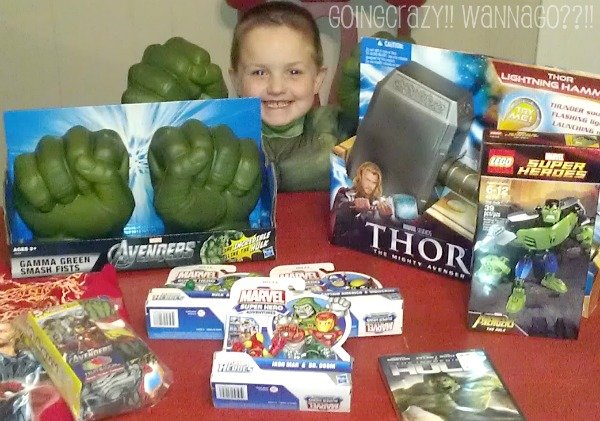 After all the shopping, we laid out all of our finds and started cooking the pizza. The Boy and I started opening toys and trying them out. Daddy joined us after a while and we had a blast. We made some Hulk SMASH, made lightning outside with Thor's hammer, saved the world with Marvels Super Hero Adventures characters, and the boys built Hulk LEGO.

We took a break to eat dinner – appetizers were jalapeno poppers (Captain America loved those) and chicken wings (Hulk SMASHed them), as well as cheesy breadsticks from Marketside – followed by Marketside Pizza from Walmart. We have tried the pizza before and really love it. The prices are great and the pizza is tasty.

While we were eating the Marvel Super Heroes Adventures figures were hard at work saving the world. They all ganged up against Dr. Doom and we all felt safe again!

We talked during dinner about the movie coming out this coming Tuesday and our boy was very excited. We told him that he would need to continue the good behavior at Pre-K (since he had been away for a week) and he needed to have no accidents while at Pre-K. Since he has brand new Avengers underpants now, he wants to be careful not to get them dirty!!

– it was time to PLAY AGAIN!! Our boy is constantly wanting us to play with him. He doesn't have any siblings and his cousins live far away (although he did get to hang out with them this week) and they are older teens. His only play is at Pre-K and we try to put down our phones (except I take a lot of pics, obviously) and turn off the TV sometimes to play with him. On Saturday night, we had the Michigan Wolverines football game going in the background, but he loves football so it was okay with him. This silly video is basically how we play and laugh and act crazy most of the time. 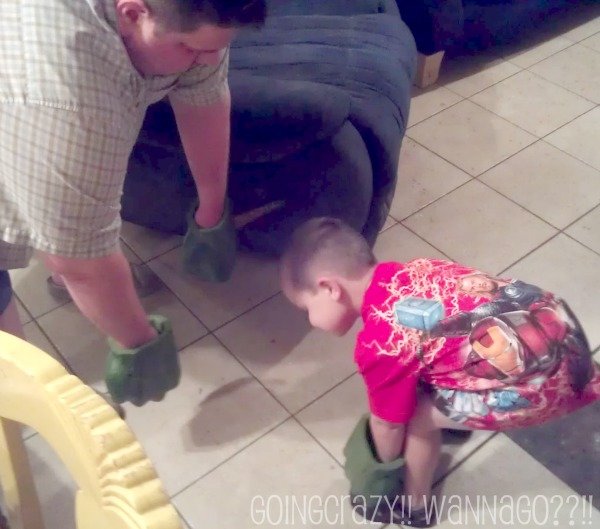 After the video, our boy announced the HULK TIRED and taught Daddy how to stand when Hulk gets tired. They humored me and hung there long enough for me to snap a pic and then it was time to retire to the bedroom. We had a couple more surprises for him at bedtime so it was time to clean up. I had the Hulk gloves on for just a minute while Hubby was putting away the extra pizza. I reached over to turn off the porch light and bring the dogs in and Hubby announces, "Hulk conserve energy, Hulk GREEN!" – he and I got quite a laugh out of that one!! 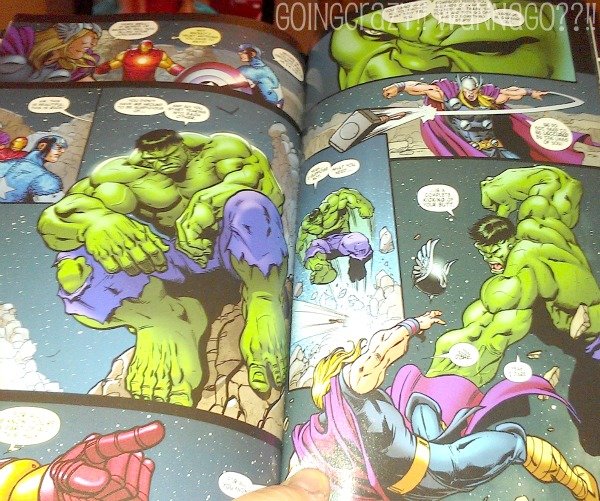 As I mentioned above, we received the Avenger graphic novel in the mail while The Boy and I were out of town. Once we got settled into bed, Daddy read some of the novel to our boy. This was the first graphic novel our boy had ever seen so he was quite excited. He loves reading and with this book, he could make up some of the story himself! 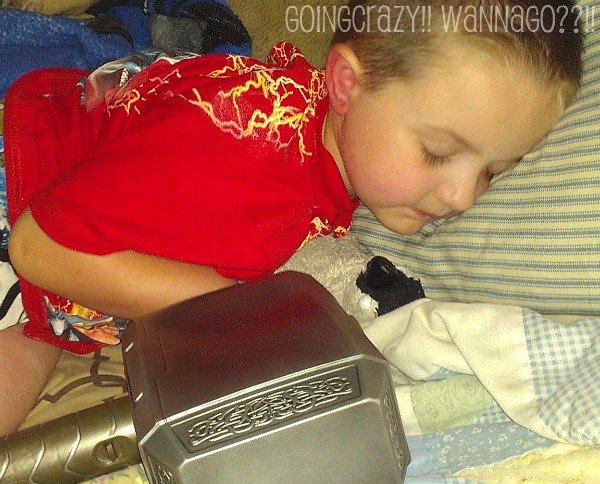 After reading through the graphic novel and turning on The Incredible Hulk movie, our boy just couldn't keep his eyes open any longer. He made it until Dr. Banner turned into Hulk for the first time and then he was out! He fell asleep with Thor's hammer (and Baby penguin, of course) and actually Hubby fell asleep shortly after. I was the only one who stayed awake for the movie. It was really good!! It made me even more excited to see Marvel's Avengers again!! 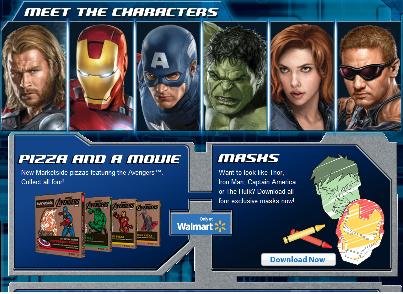 The Avengers have arrived at Walmart! Can Iron Man, Captain America, Thor, Hulk, Hawkeye and Black Widow defend Earth from Loki and his army? You can find out in the new Avengers movie on Blu-Ray/DVD on September 25, 2012. And you can find official Avengers products at Walmart.

Are you excited about The Avengers coming to Blu-Ray/DVD? How are you going to celebrate?!!

I am a member of the Collective Bias™ Social Fabric® Community. This shop has been compensated as part of a social shopper insights study for Collective Bias™ and Marvel #MarvelAvengersWMT #CBias #SocialFabric. All stories and opinions are my own.

Taking a “step” in the right direction with Lean Cuisine 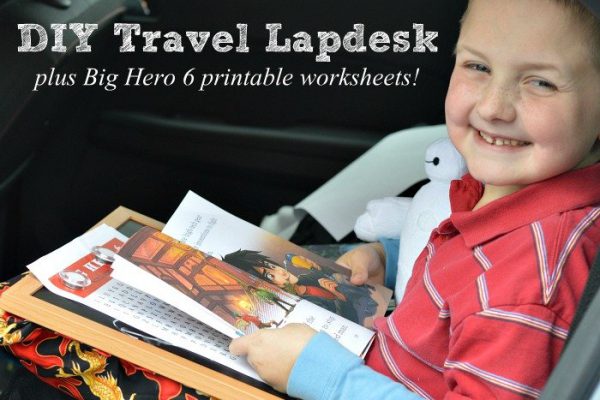 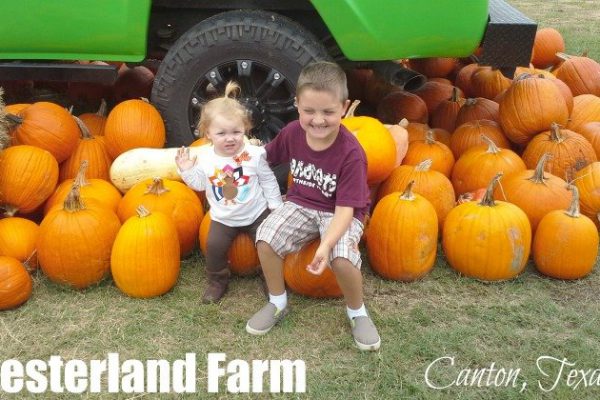