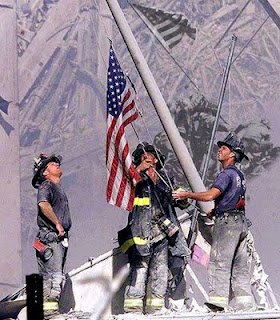 I don't like to talk about where I was on 9/11, but I might as well get it out. I slept in that day. I was late to work because I was tired and I ignored my alarm clock. I didn't have a reason for sleeping in, I just did. I was lazy and I stayed in bed.

As I was driving to work, I heard things on the radio and didn't really know what was going on. I've never been one to watch or listen to news so I wasn't paying much attention until I got to work and people started telling me what was going on. Then, I stayed glued to my computer and the radio for weeks after… I remember my roommate and I would stay up for hours at night watching the TV to find out what would happen next. Then the war started and we were glued to the news. We rarely were in the living room together before that time, but this brought us together and we would often fall asleep watching TV until late, late at night.

I don't like to talk about it because it's not profound or soul searching, but I will never forget.

My heart and my prayers go out to all of the families of those lost on 9/11 and those still suffering the nightmares from that horrible, horrible day. My gratefulness goes out to those who ran IN while others were fighting to get OUT. Please take time today to think about, pray about, honor those who were heroes and those who sacrificed it all on 9/11.

Monetizing my blog with a Brand New Media Kit {Review}
Ghost Buddy #2: Mind If I Read Your Mind?