Nurturing a Love for Horses

There is just nothing quite like the love a child has for animals. My boy is an animal lover through and through and recently he has had the opportunity to learn more about horses and I can see that love growing more and more. Do you have a strong love for horses? Did you learn that from your parents and grandparents? Are you passing that along to your children?

Riding a merry-go-round is a childhood experience that most children have at some point. Picking out just the right horse to ride is so much fun and can say something about a child’s personality. My boy loves to ride the merry-go-round so I knew that whenever we had the opportunity to let him ride a horse, he would be thrilled. When that opportunity would arise seemed so far away, but it came much sooner than we thought.

A few months ago, my stepmom took our boy to Colorado to visit my stepbrother and they had the chance to ride horses. Hubby and I had taken him to the Stockyards in Fort Worth, Texas, a few weeks prior (pics coming later) so we knew he would love to ride again. Granny said he had so much fun and this horse was much bigger than the pony he rode at the Stockyards. While at this ranch, our boy was able to brush and feed the horse so he got the chance to see this beautiful animal up close and become friends with it.

I love that he loves horses so much because it reminds me of my own childhood and my love for horses.

When I was young, my grandparents owned a couple of horses and lived on a small ranch. My aunts were in high school and I believe they had the horses for a 4H club (I have a bad memory sometimes). I have images of riding one of the horses and a picture that I know exists of my older sister and I riding one of them. I have been asking around the family to find that picture, but haven’t found it yet.

The memories that I have are that my grandparents lived in a home that they built themselves. We didn’t spend much time with them as I was growing up so I cling to the memories I have as best I can. This home that I can remember was one of the two stable homes that I remember them having. They had a huge piece of land and two horses, Scotty and Paige. Paige was a show horse so it is likely that we rode Scotty. I don’t know if we rode her much, but I remember riding with my sister. I must have been about 4 years old, the same age as my son is now. Paige was struck by lightning and died and I don’t know what happened to Scotty. I only have two aunts left on my mom’s side of the family so I need to ask them more.

Hubby is from Detroit and we met in Austin so when we moved back to my small country hometown, I wondered what he would think of the country life. Since it was his idea to move here, I had hopes that he would be able to appreciate the slow, country life…and he does. One of the things that we have talked about since settling in and considering this town our forever home, is that we both would love to own a ranch someday. I have visions of owning horses and watching them roam around on the land, bringing them in to brush and love on them. Just behind our house is a lot of country land and several of the homes have a horse or two. I love driving on those back country roads and watching the horses run or stand and watch. Our boy always asks to stop and talk to them. We will usually slow down and watch or talk through the window, but haven’t ever gone close. I just know that he would be the best horse owner, whether we had a horse to ride or just to care for.

I have recently heard about this organization, Saving America’s Mustangs, and this rush of memories has come back. It strengthens my desire to work toward owning a ranch or caring for horses in some way. 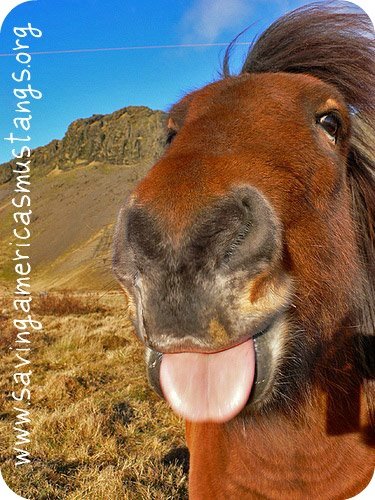 Wild horses are a living symbol of our American heritage and freedom. These Mustangs must be protected. Businesswoman and philanthropist, Madeleine Pickens, is committed to this promise. Through her Foundation, citizens from all walks of life are uniting to create a permanent home, a Sanctuary, to save these magnificent national treasures. – Saving America’s Mustangs 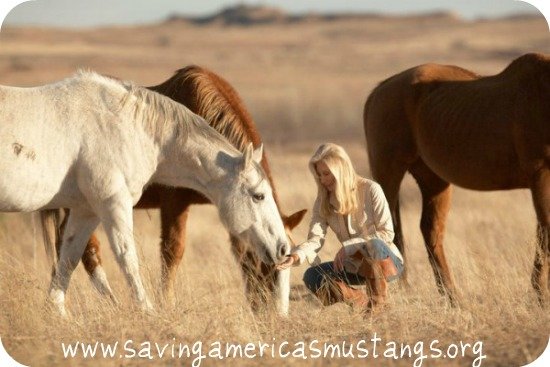 The idea that an organization like this must exist saddens me. I have a very tender heart and I don’t understand how anyone would want to hurt an animal, much less beautiful horses. Madeleine Pickens is an angel to these wild horses.

One hundred years ago there were 2 million horses roaming free, that number is now maybe 28,000. With the government gathers scheduled indefinitely, they are on the path of extinction.

Disclosure: I am a member of the Collective Bias™ Social Fabric® Community. This shop has been compensated as part of a social shopper insights study for Collective Bias and Saving America’s Mustangs.  All stories and opinions are my own. #CBias #SocialFabric #SaveAmericasMustangs