Who is more excited about Ice Age coming to theaters today, you or your children?! The Boy and I had an awesome opportunity to attend a prescreening of Ice Age last week and I honestly believe that I may have been more excited than him. Of course, once the movie started and we saw PIRATES we were both excited!! {because you know how much I love pirates, right?!}

New Friends at the Movies

We had a couple of extra tickets available for the prescreening so we invited Cyndy from Mama Does It All and her daughter, Gwen. They were happy to join us and the kids are about the same age! 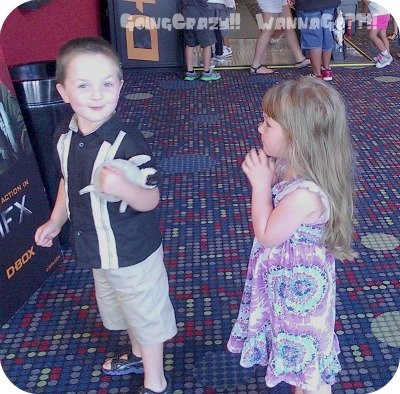 The Boy was excited to show Gwen his "baby" and his new sandals. He even asked to wear his "handsome clothes". He told me on the way to the movie that he was going to show her his "baby" and then marry with her. Cyndy said that Gwen asked if he would be her boyfriend. So adorable!! 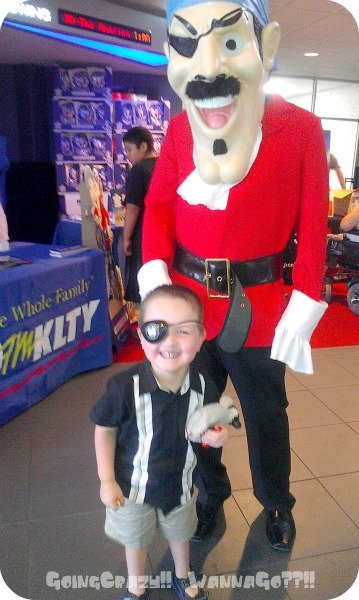 Before the movie started, this Pirate's Booty pirate was walking around and since you know my family LOVES pirates, my boy was so excited. He has always loved to see people in costumes {thank goodness, no scared photos with Santa or Easter bunny} so he ran up to this pirate, gave him a hug and posed for pictures. Then, he got an eye patch and he was {literally} jumping with excitement. Unfortunately, Mommy HAD to lose the eye patch during the movie, but at least we got a picture first!

We laughed from the minute the show started and were laughing and dancing on the way out the door!!

If you have seen the first three installments of Ice Age, you know poor Scrat by now. He's the clumsy squirrel trying to catch that cursed acorn and this time when he chases it around, he creates a continental divide that sends our friends Manny, Diego and Sid on a whole new adventure. Sid comes face to face with Granny again and the herd meet Captain Gutt and his pirate crew, who vow to stop the friends from returning home.

It's been said that as a movie gets into installment two, three, or more that the quality suffers or the storyline is poor, but I do not believe it happens in Ice Age 4!! My boy and Gwen laughed so hard through the movie and they kept asking each other "did you see that?"! We could tell they were having a great time! I can tell you that honestly I have never seen my boy get so engaged in a movie and stay engaged throughout the entire movie.

I'm giving this movie two thumbs up, 5 stars, 5 couches – whatever is the highest of ratings. Go see it, you won't be disappointed.

Take a friend and maybe you can walk out holding hands like these two. 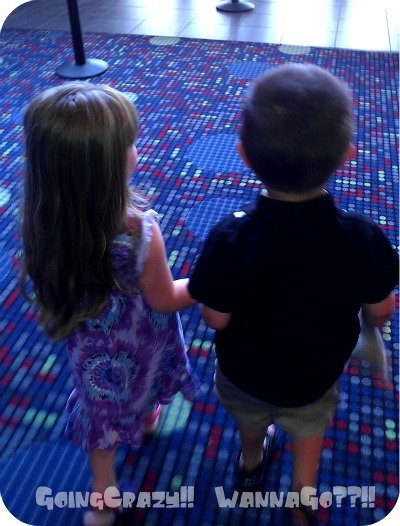 Find out more about Ice Age by visiting IceAgeMovie.com, following on Twitter @IceAge, and becoming a fan on Facebook!

Disclosure: We received free tickets to an advance screening of Ice Age: Continental Drift; however, we were not asked for any media posting in return. The decision to post, as well as all stories and opinions within, are completely my own.