All You Have To Do Is Jump

When my boy was about 14 months, we began to worry that he was not walking yet and was not pulling up or cruising all that much either. We talked to his doctor and she helped us get hooked up with Early Childhood Intervention (ECI), a non-profit organization that helps children with developmental screenings and delays. We had an evaluation and I learned that he was weak on his left side. I had always noticed that when he sat, his legs were bent to the left (rather than most children will either sit criss cross or with one leg on each side) but I had never put much thought into it. From him sitting this way since 9 months when he first sat up, until 14 months, this had weakened (constricted) the muscles in his left leg. While this weakening did not prevent him from walking, it didn’t “help” either.

We did a little bit of physical therapy and he started walking at 20 months. He’s 4 now and we can still notice some balance issues and weakness. I have a small obsession with him sitting criss cross rather than bending his legs to one side now, but he tolerates me well.

Also because of this weakness, my boy did not jump (like, two feet off the ground, jump) until just a few months ago. We encouraged him and he would skip and do a one foot jump, but the day that he jumped off the ground with both feet, I was ecstatic!! He must have noticed that it excites me because every time he gets excited now, he stops to balance and then jumps 3 or 4 times. It’s quite hilarious, actually.

Since The Boy started T-ball this year, we have a new challenge and this one is just as cute. Jumping Jacks – who would have thought they would be so difficult to do, much less difficult to TEACH?!! 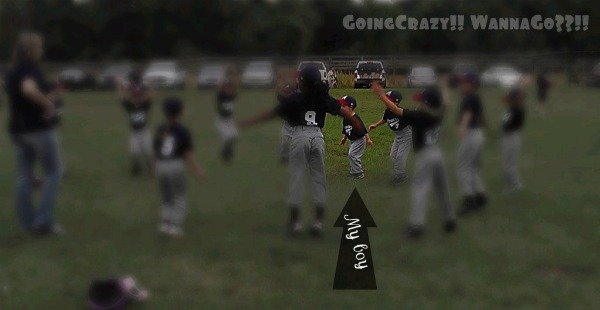 What is the first thing that YOU think of when you hear the word JUMP?