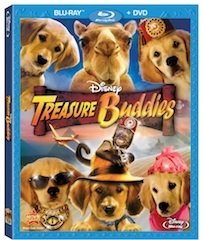 I have to admit when I knew Treasure Buddies was on the way for us to review, I was a little worried. Not because I didn't think we wouldn't like it, but because my little one doesn't have a great track record with making it all the way through a movie that wasn't cartoon-y.

I had nothing to worry about because talking dogs…just as good as cartoons!!

The Boy has gotten used to getting "prizes" in the mail so when Treasure Buddies arrived, we were headed straight for the DVD player!!

We loved watching Treasure Buddies and made it all the way through – dazed by the adorable talking dogs – and we've watched several times since (about one hundred at last count :)). Of course my boy had the giggle fits when the puppies found a pile of camel poop in the desert and I laughed at the puppy who saw a mirage in the desert and then rolled around in it, trying to eat the sand. This is a funny family movie and I'm glad that I decided to go for it and review this one!!

A little more about the movie:

The 6th film in the Buddies franchise stars everyone’s favorite talking canine superstars Rosebud, B-Dawg, Budderball, Buddha and Mudbud, as the pup pack journeys to mysterious Egypt in search of the greatest treasure known to animalkind, the legendary Cat’s Eye jewel, from the lost treasure of Cleocatra! Danger lurks around every secret sphinx, cryptic crypt and puzzling pyramid as Ubasti, a devious cat, schemes to possess the mystical jewel and use its powerful energy to rid the planet of all dogs! With help from new lovable friends Cammy, a baby camel – and a mischievous monkey named Babi – the gang and their new friends avoid booby traps, solve puzzles and explore a mysterious tomb in their most exciting and challenging adventure yet.

“Roam” Music Video – A re-make of The B-52s song performed by Caroline Sunshine, Kenton Duty and Adam Irigoyen from the cast of the Disney Channel hit series “Shake it Up.”

Check out these clips!!

I'm giving away a copy in a quickie giveaway, click over to my Movie Madness Giveaway from today until March 9 at 11:59pm EST to enter now!!

Treasure Buddies was released on January 31, so head on over and buy your copy NOW!!