Take Your Teddy to Work Day!!

I wish I had known this BEFORE I got to work today, but Today is
Take Your Teddy to Work Day!!

Luckily, I have 3 little bears on my desk from my wonderful Hubby that I can cuddle with all day. One of them even has a picture of me holding my baby boy and it says “Mom, You’re a Princess”…

When I was growing up I didn’t have a favorite teddy, but I did have a big stuffed dog that I got around the time that Spuds Mackenzie was popular (you remember from Budweiser?…yeah, long childhood story there…

). Anyway, my dog’s name was Bakenzie…haha!! I still have that dog somewhere and his nose is all worn out and he probably needs a good cleaning. He’s wearing one of my t-shirts from when I was young. I think it’s the one that says “Porcupine Lyn”…yup, my nickname because I had spikey hair as a baby.

My boy is not particular about which toy is his favorite, but he does get stuck on one at a time AND he LOVES every stuffed animal in the world!! Luckily, Hubby has a knack for winning prizes from the crane machine so we have about a bazillion odd looking stuffed animals around the house. You know the ones that almost look like the real character, but have crossed eyes or their heads are out of whack. My favorite (and I can’t remember if it was his or mine) was a giraffe that had pink horns…with tassels!!

Although he doesn’t have a favorite toy, The Boy has become extremely attached to a blanket that we tried to name “silky blankie” but he has named “silver blankie”. It started with a blanket that Hubby was attached to as a child and it had some circus stuff on one side and plain white on the other. Hubby called it “stinky” as a child, but I don’t think he would want me to tell you why.

Well, the white side was getting worn out so Hubby’s mom sewed on a thick layer of yellow, shiny, silky fabric as the backing. Hence, the name we started… One day at daycare, apparently The Boy found a small hole in the circus side and started playing with it and shredded that whole side!! When he showed it to us, Hubby was upset!! Hubby asked him why he did it, but his response was “I got to..” About two weeks ago, The Boy spent a few days with my stepmom and dad and Granny sewed on a piece of a patchwork quilt over the circus side and now it’s all better!!

While The Boy LOVES his “silver blankie”, he is not so extremely attached that we have to carry it everywhere…thank goodness!! The most we have to do is carry it back and forth from daycare to home each day…sometimes… I wish I had a picture to share, but I’ll share this: 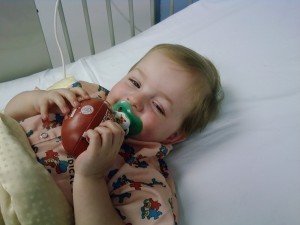 This is my boy heading into hand surgery just before his second birthday. He had started holding that football a few days before surgery and would not give it up. He held it while he ate, slept, bathed!! They let him carry it into surgery and when he woke up after, he looked over at me and said “where’s my football”.

There’s a small peak of “silver blankie” in this pic too!! I just realized that!!

On a side note, I just texted Hubby that today was Take Your Teddy to Work Day and he said he was sorry that he couldn’t come to my work today because he has to work too!! He’s such a goofball!!

Tell me about your favorite childhood toy…or your child’s favorite lovey!!

2 thoughts on “Take Your Teddy to Work Day!!”